An invasion of the Ju/’hoansi territory in Namibia known as the Nyae Nyae Conservancy, which began nearly two years ago, ended in a Namibian courtroom on Tuesday last week. The farmers who illegally invaded the indigenous reserve have been fined and the case appears to be closed. 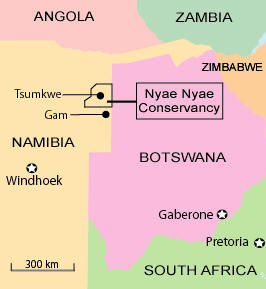 The dispute started in early May 2009 when five Herero farmers living near Gam, just south of the Conservancy in Namibia, cut the fences and invaded with their cattle. They complained that their animals were eating a poisonous weed on their own land. Shortly after, more farmers brought their cattle through the fence and onto Ju/’hoansi property. Within a couple weeks, 29 Herero families had brought more than 1,000 head of cattle into the Conservancy.

As details emerged, it became clear that the invasion threatened the entire beef industry of Namibia. The deadly foot and mouth disease may be present in the wild animal population in the Conservancy, and the fence the invaders cut was put up not so much to protect the wildlife as to protect cattle outside it from contact with wild animals within. If one carcass would turn out to be infected with the disease, the entire beef industry in the nation might be sanctioned internationally. The government quickly impounded all the cattle and moved them from conservancy property to another location, where they prepared them for auction.

Despite the loss of their cattle, the Herero families remained in the Conservancy. The Herero farmers are very poor themselves, as are the Ju/’hoansi, so a drama played out between the two poverty-stricken populations, both with supporters in high places. Advocates formed on both sides for a legal battle. Although politicians got involved, nothing much happened and the living conditions of the Ju/’hoansi suffered due to the unwanted presence of the Herero invaders in their communities.

On Tuesday, the Magistrates Court in Tsumkwe finally settled the matter. The 32 farmers now involved were each fined N$1,500 (US$224) for illegally entering the Veterinary Zone, the Conservancy property, maliciously damaging property, and grazing their cattle against the law in a communal location.

The accused farmers paid their fines to settle the criminal charges and the case was closed. The news report last week indicates that the government of Namibia never did auction off the Herero cattle. It concludes that the Ju/’hoansi “continue to face and feel the repercussions of the disturbance to their land.”