A couple Hutterite colonies in Montana are hoping to make some profits from a new agricultural business that has the virtue of being, they feel, both sustainable and environmentally sensitive. It appears from a news report as if environmental considerations are very important to the colony.

The Miller Colony near Bynum, Montana, and the East End Colony near Havre are entering the fish farming business. They are determined to not make the mistakes that many earlier fish farms have made. With their hog operations now losing money, they needed to try other business options.

The Miller Colony pioneered the venture last year. David Wipf, the Secretary/Treasurer and spokesman for that colony, had heard of a Hutterite tilapia farming business in the Dakotas. He wondered if it would be possible for his colony to get into fish farming of some sort, perhaps raising salmon. They were already comfortable with growing many different agricultural products, but “fish are a different animal,” he told a reporter with a smile. 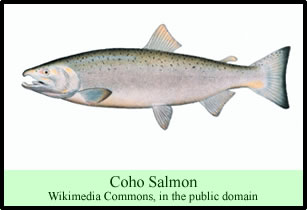 The colony quickly learned that the state of Montana considers coho salmon to be an exotic animal species, so the department of Fish, Wildlife, and Parks (FWP) of the state required the colony to surmount numerous requirements in order to be licensed as a salmon farm.

A five-person panel specified that the colony had to get a permit to introduce an exotic animal into the state. Tim Feldner, the manager of commercial wildlife permitting for FWP required the colony to build the salmon farming operation at least 200 feet from any surface water, and it had to be completely outside any 100-year flood plain.

He also would only permit salmon eggs to come into the state, and not live fish. Fish would have to be grown, butchered, and processed on the site. No live fish would be permitted to leave the colony grounds. The federal Food and Drug Administration and the county sanitation agency would also have to approve the facilities.

The regulations were designed to try and prevent any tragic environmental problems from developing. Wastes from the fish farming would not be allowed to come within 200 feet of any surface water, including even intermittent streams. The agency was also concerned about the possibility of any gutted fish remains being carried away by birds, because they might get into the native fish habitat. Furthermore, the FWP requires each batch of salmon eggs to be tested for bacteria or diseases that could harm native species.

Mr. Feldner commented, “aquaculture in this scale has not really been done in Montana. We want to lay a good foundation so it’s done correctly.” Ken Stagmiller, manager of the fish health lab for FWP in Great Falls, described the way the agency tests for diseases in the fish eggs—by dissecting samples and searching for egg-transmitted pathogens. He said he was quite impressed with the Hutterite operation. He is curious to see if they can be successful at aquaculture.

The Miller Colony uses the latest technology to filter out wastes from the water, which is continually re-circulated in 30-foot diameter tanks. At other fish farms, salmon are often raised in open pens next to oceans, where non-native species can escape, spread diseases, and introduce alien pathogens. They are also grown in land-based pens, but many operations feed the salmon as much as five pounds of fish meal for every pound of meat sold. Those aquaculture operations, in other words, are hardly sustainable, a designation that has become increasingly important to many consumers.

The Hutterites are aware of growing concerns about environmental dangers and sustainability issues surrounding aquaculture. They are also aware that the Monterey Bay Aquarium Seafood Watch program now approves of raising coho salmon in land-based facilities with proper tanks and filters in a sustainable fashion. Wal-mart and Target stores are saying they will only sell fish grown in a sustainable manner. In sum, the Hutterites have many incentives to get this operation right.

The colony has erected 100 by 275 foot barns for the fish tanks, with locks and signs that prohibit anyone from entering who has been near waterfowl in the previous 24 hours. The salmon—the first batches of 10,000 and 12,000 eggs arrived in December—have now grown to several inches in length. By fall they should weigh about six pounds and be ready to fillet and sell. The fish will spend their lives in the tanks, being pumped from one to another as they grow. The risk of them getting out into the wild is minimal. Nearly 99 percent of the water is re-circulated and reused every 30 minutes in the farming operation.

The colonies purchased the expensive aquaculture equipment from the AquaSeed Corporation, a Washington-based firm which, through its SweetSpring label, supplies the fish eggs and the fish food. The company maintains that the fish food they provide is superior to that used in traditional salmon farms because it is made with a blend of grains, beans, and other vegetable proteins, along with only a minimal amount of fish protein.

Mr. Wipf, the Miller Colony Spokesman, says that other Montana Hutterites have expressed a lot of interest in their operation. The East End Colony is actively following their lead. Mark Waldner, manager of the fish barn at that colony, is not sure how much water his operation will use, but he suspects it will be no more than their hog production did. The water is reused, just like at the Miller Colony.

He indicates that his colony plans to sell some of their salmon locally, as a good-will gesture to Montana people who have supported them in their new venture. They plan to offer some of the fresh fish meat at the Great Falls farmers market later this year, along with the vegetables they grow.