Some peaceful societies forbid the consumption of alcohol, which they feel might make them aggressive. Peter Gardner, in an article published in the 1972 book Hunters and Gatherers Today, indicated that the Paliyan have such a prohibition. One of their safeguards for preventing anger is to carefully avoid alcoholic beverages. They believe that it causes aggression among their Tamil neighbors, and it might affect them the same way. 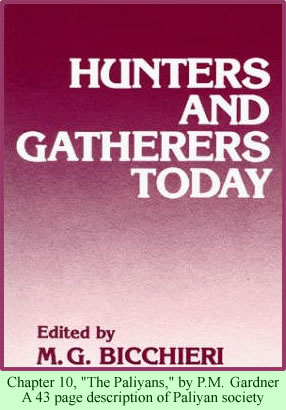 It is not clear from the literature if one of their neighboring societies, the Kadar, have a similar attitude. If so, the prohibition is clearly disintegrating. One of India’s leading newspapers, The Hindu, carried a story last Friday that described the declining health of the Kadar people, where alcoholism is becoming a major problem.

The newspaper article mentions that the use of tobacco, and the spread of tuberculosis, are also threatening the health of the Kadar, but alcoholism appears to be the most significant problem.

P.K. Bijoykumar, a local medical officer, said that alcoholism is prevalent in Kadar villages. A young Kadar mother, Sanimol, told the reporter that most of the men regularly consume alcoholic beverages. She said that her own husband never comes home in the evening without first spending time drinking with the other men.

Mrs. Kanchana Vijayan, who was formerly the president of the Athirapilly panchayat, said, “to my knowledge, no one has quit the habit in the tribal belt despite the number of awareness programmes held here.” The Kadar women in the village of Pokalapara agitated to finally stop the illegal manufacture of alcohol in their community, but now some of the men are able to obtain it in the town of Chalakudy and sell it themselves.

Mrs. Vijayan, who is the president of the Tribal Vana Samrakshana Samithi in Pokalapara, said that the vendors of illegal alcohol are selling it at exorbitant rates. Usha, another Kadar, said that the women had raised the problems of alcoholism in various forums, including at local meetings and before welfare officials, but their activities have not helped—at least not yet.