The Hindu, a leading newspaper in India, recently reported on alcohol problems among the Kadar. The same paper last week published two more articles about them, the first of which focused on their new venture—the cultivation of pepper. 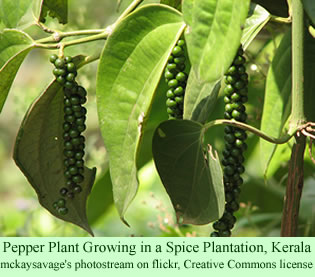 The reporter indicates that the Kadar of Pokalapara, located in the Vazhachal Forest District of Kerala, decided to plant 4,000 pepper plants during the last rainy season. The 26 families in the settlement hope to start selling their pepper in a couple years.

They were inspired by a very successful Paliyan venture in raising organic pepper near the Periyar Tiger Preserve, also in Kerala, which was reported in September 2008 and again in March 2009. This article last week indicates that pepper farming by the Paliyans is making a lot of money for them.

The reason the Paliyans are successfully growing pepper organically, according to Omana, a Kadar farmer, is that the vines are otherwise subject to diseases. Apparently, organic manure is the best type of fertilizer for the plants.

Traditionally, the Kadar have subsisted on fishing, gathering, and selling minor forest products such as honey and medicinal plants. They are also employed as guards by the Forest Department. This latest venture is being supported by a government program called the National Rural Employment Guarantee Scheme, in which tribal farmers are given financial support for working on their own lands.

The Kadar initially resisted getting involved with farm work, which is not something they have done before. Now they are cooperating with the program, which is managed by Vana Samrakshana Samity (VSS), a collective in their community that coordinates their forest protection work, their collecting activities, and now their pepper cultivation. Omana said that her husband, Biju, also participates in the farming work whenever he is free. The Kadar are growing the pepper as a group project, and the profits from the venture will go back to the people. 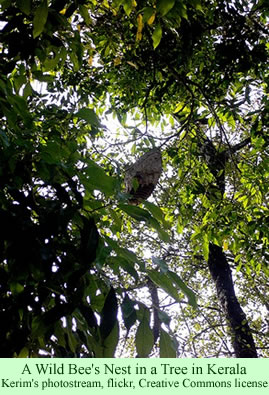 Another news story in The Hindu the next day described the honey gathering practices of the Kadar. Apparently, they are going quite badly this year due to too much rain in the region. The Kadar normally search the forests from March through mid-May to locate tall trees with honeycombs hanging from the branches. They pound nails into the tree trunks to climb up and smoke out the bees with torches made from palm leaves. Then they bring the honeycomb back to the central cooperative facility in their village, to the VSS, to be prepared for sale.

The Kadar gatherers are normally paid Rs. 140 (US $3.10) per kg for the honey they bring in. It is sold by the samity, the local government body, for Rs. 300 (US $6.64) per kg. The government agency keeps the profits in the Kadar community.

But honey production will be much less than normal this year due to excessive rains. Kunijivelu, a 65 year old Kadar man who is now too old to climb up the trees and collect the honey himself, said that “the untimely rain will leave just wax in the honeycombs.” Instead of the normal 5 tons of honey gathered each year in the Vazhachal Forest, the Kadar have only brought in 40 kg. Most of the men have simply not bothered to go into the forest to try and find any. Kunijivelu indicated he is now employed by the forest district in conservation work.