News about the Birhor last week in India’s Jharkhand state included a tragedy in one district one day and a triumph in another the day after. 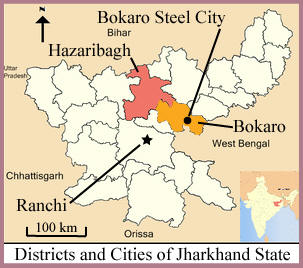 In Hazaribagh district, Kishun Birhor, a laborer working at an illegal stone quarry, stopped to take a break next to the edge of the hole. Due to a drought, he walked right out to the edge of the water-filled quarry to bathe and wash some utensils when he suddenly slipped, fell in, and drowned.

Because the quarry did not have a permit to operate, the owner retrieved the man’s body and quickly buried it in a nearby forest to avoid dealing with the police. A villager told the press that “the quarry owners forced the widow of the deceased to succumb to the pressure of the powerful stone mafia and buried Kishun.”

Birhor village leaders went to the local police station to demand that the quarry owners be forced to compensate Kishun’s family. The police meanwhile filed a charge of negligence against the owners. Whether the officials will do anything about the way the Birhor are exploited by the small, local business remains to be seen.

News the next day about another Birhor community, Tulbul village, in the Gomia block of Bokaro District, was much more upbeat. Four out of the five Birhor boys studying at a school set up for tribal children by the Bokaro Steel plant in Bokaro Steel City have passed their graduation exams quite effectively. Only one boy, the fifth in the group, failed to pass.

Evidently, the village was ecstatic. While last year four Birhor boys barely made it through the exams, this year two of them did exceptionally well and obtained firsts. Two others got seconds on the test. The village was in a festive mood as they welcomed home their heroes.

According to a news story in The Telegraph, a leading Indian newspaper, 300 people were out reveling in the village since daybreak, waiting to greet the town heroes when they returned home from Bokaro.

Sundar Birhor, one of the two students who got a first place in the exam, said he might like to go into engineering as a career. His father, Bhikhan, who tends goats, appeared to not really understand what his son was doing, but he is proud of him anyway.

The boy graciously thanked the Bokaro Steel Plant for giving him the opportunity to get his education, and for providing his room and lodging while he was at school. Sundar said he plans to work at the steel plant and to help out other Birhor kids. He feels that raising goats, as his father does, is a waste of time. The steel plant has gotten publicity before for providing schooling for the Birhor children.

Suresh Birhor, who got the highest score of all the students, said he had once tried to run away from the student hostel in Bokaro and return to the village, but he had persevered. He admitted he was overcome with emotion when he learned how well he had done.