Problems with suicides continue to plague the Inuit of Nunavut. Another incident—this time a family homicide, followed by a suicide—horrified Canadians last week. 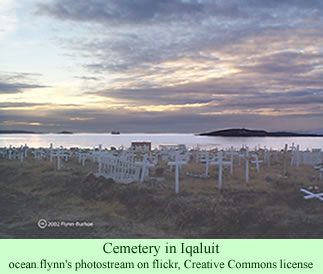 The capital city of Nunavut, Iqaluit, was stunned to learn that a 44 year old man had taken his life in a cemetery after first killing his 29 year old partner and their two daughters, ages 7 and 2, in their home. The police refused to comment on the rumor that the man had killed himself on the grave of his own sister who had died of suicide earlier.

The day after the murder and suicide, Sheila Levy was on her way to the school which the seven year old had attended to do some grief counseling, but when the taxi driver taking her there learned of her mission, he needed some counseling himself. He, as well as almost everyone else in Iqaluit, knew one or more of the victims of the latest tragedy.

A 2009 report found that about 600 suicides per 100,000 people occur every year among young Inuit men, ages 18 to 24, about 28 times the rate in the rest of Canada. Statistics for other types of violence, such as overall suicides, and rapes among family members, run about 10 times the comparable rates in southern Canada.

Nunavut has no live-in mental health or addiction treatment centers, and is only slowly attempting to cope with the suicide issue. Problems have to be addressed by sending people south for treatment. It can take up to six months for people who need help to see a counselor. A suicide prevention plan that the territory adopted has yet to be implemented. Agencies that seek to help the Inuit don’t coordinate their services.

Simon expresses her frustration. She realizes that programs such as those cost money, but she says that the Inuit, like all other Canadians, pay their taxes. “Why can’t we have similar services that the rest of Canada take for granted?”

Ms. Levy said that the classmates of the little murdered girl are doing just fine. The school staff and teachers are working with the kids to cope with what happened. Many need to just get back to their normal school activities.

Glenn Williams, a coroner who is involved with suicide prevention, says that each new death compounds the problems and adds to the pain of the community. “In order to go forward, the community and the individuals have to deal with the burden they’re carrying already,” he said. Whenever meetings are called to attempt to devise prevention strategies, they turn, instead, to grief healing sessions. Everyone who shows up has been affected by suicides, everyone is in pain.

Jack Hicks, an authority on Inuit suicides, said the violence is a direct result of the Inuit having been removed from their lives on the land a couple generations ago. The trauma was not noticeable among adults who, themselves, moved in from the land, but among their children and grandchildren.

He refers to the problem in Nunavut as a high rate of intergenerational transmission of historical trauma. “That trauma has to be addressed,” he said, “or there is no reason to expect that rates of suicidal behaviour will decrease.” Earlier reports on Inuit suicides have similarly dated the problem back half a century, to the time when the government of Canada forced the Inuit to move into settled communities.

Mr. Williams, the coroner, told the press of the way he handled the suicide of a school boy in the community of Arctic Bay. He included some friends of the boy when he retrieved the body. They helped build his coffin, and helped dig his grave. The community “didn’t have a suicide for quite a few years after that,” he concluded. It helped make the problem very real to the kids and their parents.