Nine Schwartzentruber Amish men lost their appeal to the Kentucky Court of Appeals last week. They had sought a religious exemption from a Kentucky law which requires slow moving vehicle triangles on the back of horse-drawn buggies on public roads. The three-judge court ruled that the public’s right to safety outweighed the contention by the Amish that the highly visible signs violated their religious beliefs. 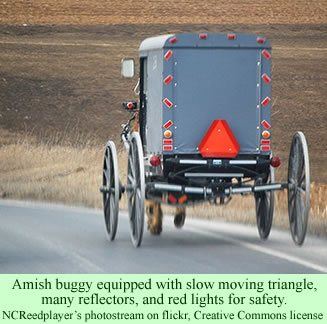 The nine men had been convicted of misdemeanors in 2008 in a lower court for failing to abide by the law. The garish colors of the triangles—designed to be easily visible at night as well as during the daytime—contradicted their code of modesty, they claim. The Amish also contend that they do not believe in trusting their safety to worldly symbols. Other Amish groups have no problem with displaying the slow moving triangles, and other safety devices, on their buggies.

Alternative approaches that the Schwartzengruber Amish had attempted to use—displaying lanterns, or putting gray, reflective tape on their buggies—had been rejected by the state motor vehicle authorities because they are not visible enough, especially at twilight when accidents are likely to occur.

Assistant Attorney General for Kentucky, Christian Miller, indicated in the court in March that everyone had to obey laws that were designed for the safety of all. On many public highways, he said, vehicles drive at 55 miles per hour (90km/h). A buggy going at less than one-fifth that speed is dangerous not only for the occupants of the buggy, but also for people in motor vehicles.

Miller maintained that, according to federal case law, it is permissible at times to compromise the claims of religious rights by specific groups, as long as laws do not deliberately target those groups.

Senior Judge Ann O’Malley Shake wrote in the decision last week, “this court is not in the business of tenaciously restricting religious practices.” She went on to write, “However, such practices cannot infringe on the rights and safety of the public at large.” William Sharp, from the American Civil Liberties Union of Kentucky, which is handling the case for the Amish, expressed his disappointment with the outcome of the appeal. He indicated he would consult with his clients to see if they wanted to appeal to the Kentucky Supreme Court.