Have the Fipa heard of Lucrezia Borgia, the Renaissance Italian woman who was rumored to have murdered people with poisons that she allegedly hid in her ring? In 1968, Roy Willis described the beliefs and practices of sorcery by the Fipa in a couple articles that provide useful clues to understanding their reactions to witchcraft, and to possible poisonings to this day. 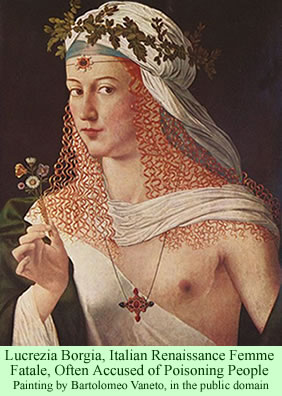 In one article (1968a), he indicated he was frequently warned about the dangers of being poisoned during his fieldwork there, especially by people who seemed to be friendly to him. Even if a man took a sip from a bowl of beer before passing it along to his guests, to show that the beverage was safe, the host could have stored a bit of poison under his thumbnail, Willis writes. He could then secretly poison the beverage just before handing it over. The Borgias all over again.

Willis describes the way the Fipa at first assured him that sorcery did not exist any longer, but they soon talked of little else. The anthropologist assumed that their previous reticence on the subject was due to the fact that they did not like to discuss a practice that they knew Europeans would not accept.

In fact, he soon realized, using poisons was only part of a larger body of sorcery practices in the Fipa culture. He wondered why poisoning had become so prominent among them by the 1960s. Then he concluded that poisoning was in fact the one technique that the Europeans would recognize, even if they disapproved.

He quotes from his own journal. The text indicated that if a person became ill, particularly with a stomach complaint, everyone immediately assumed that a poisoning had occurred. “If someone dies suddenly ‘poison’ is the instant cry….But I have yet to hear of a single authenticated case of poisoning (p.148).”

In another article published the same year (1968), Willis describes sorcery among the Fipa in detail, plus an anti-sorcery movement that spread across the countryside while he was in the field. He argued that day-to-day witchcraft accusations were a function of personal relationships and misfortunes. Illnesses, deaths, and the loss of livestock or crops could produce witchcraft accusations when these events occurred between equals in a community. He added that accusations between different generations were rarely, if ever, made. Furthermore, sorcery was usually a private matter when he was in Ufipa.

All of this came to mind last Monday when the people in two villages on the Ufipa Plateau near Sumbawanga, located in the traditional territory of the Fipa, accused two old men of witchcraft and brutally murdered them.

In Mashete village, Nkansi District of the Rukwa Region of Tanzania, Lydia Monela, a 20 year old woman suffering from a disease, became hysterical from the pain of her illness. She began to scream that her 98 year old grandfather, Peter Kisalala, was bewitching her. Her father, Albin Abdalla, 68, rushed into the house and beat his own father to death. Another son, Linus, and other members of the family, assisted in killing the accused witch. Monela herself was quickly taken to a nearby health center where she died, diagnosed with cerebral malaria.

The same day in the village of Kianda Igonda, in the Sumbawanga District of Rukwa, Gabriel Katembo, a 68 year old school teacher, began vomiting blood and soon he too died. Mourners accused his 70 year old uncle, Gervas Katembo, of bewitching his nephew. They challenged him to resurrect the dead man, which he admitted he could do. So the crowd lynched him.

Rukwa Regional Police Commander Isuto Mantage described the two killings to the press. These incidents follow a pattern of earlier witchcraft killings in the Rukwa Region, and of mob violence against suspected witches.

These news stories last week, added to earlier reports of a similar nature, show that the witchcraft discussed by Willis is still accepted and feared, though changed in some ways in Ufipa.