The socio-economic conditions of the Birhor have been back in the news in India last week, with three different articles published relating to their food security, demographic conditions, and lack of forest environment, all of which may affect their survival. 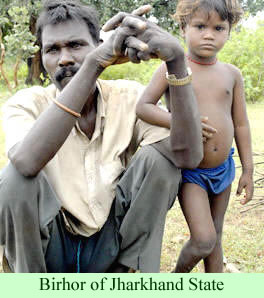 The first report, published at the beginning of the week, discussed the death of 55 year old Ratni Birhor on September 18th in Tilra, Ichal block, Hazaribagh district, Jharkhand state. The author of the news article, Jitendra, claimed that Ratni died due to starvation. He alleged that the death was caused by the failures of the state government administration, plus the incompetence and corruption among NGOs that are getting funds designated for helping the tribal peoples.

Jitendra wrote that Ratni’s job card showed she had not worked at all, and that she had not received any food grains in the course of the previous four months. Furthermore, she was not benefiting from any old age pension support. Also, the roof of her government-provided cement block house was leaking. “She died of sheer negligence,” the journalist concluded.

A news report on September 20th had given very different information. It reported that the Hazaribagh district government was denying reports that the woman had died of starvation. Sub-divisional officer Binay Kumar, who headed an inquiry team, maintained that the woman had died of natural causes, and negative reports in the media were untrue. He said that the deceased woman, as well as other members of her family, had drawn their appropriate pension amounts of Rs 1200 (US$25) on September 12, six days before her death.

Nonetheless, Jitendra’s diatribe continued. Evidently, a fact finding team sent out by the anti-mining, pro-indigenous rights group Jharkhand Mines Area Coordination Committee (JMACC), found that when news reports were published about the suspicious death back in September, government officials quickly placed grain in the woman’s house in order to cover up her starvation. Another Birhor couple, the journalist alleges, are also on the verge of starvation.

Jitendra links this story to the eight Birhor people who died of mysterious causes back in 2008, probably due to malnutrition, though that was never clearly proven. It is clear that that tragedy, a national scandal three years ago, still reverberates in some circles in India.

On Wednesday, another news story about the Birhor pointed out that, unlike much of the rest of India, people in that society do not abort female fetuses. Birhor women give birth to as many girls as boys.

In the quaint English that the news reporter used to translate the local language, Surender Birhor said, “we think for our large family and girl child always welcomes in our community.” He added, “barely any families in the Birhor community think of family planning which is considered an outlawed. A girl child is a boon for the Birhors.”

The journalist, Ashis Sinha, writing from Bokaro, provides grim statistics about the selective abortions of female fetuses in India. The recent national census showed that for every 1000 boys between the ages of zero and six throughout the country, there are only 914 girls.

The third article, also by Mr. Sinha and published last Thursday, discussed the overall changes in the Birhor economy and society in recent decades due to the logging of their forests, which destroyed their traditional livelihoods. The author emphasized that the loss of the forests has threatened the relationships between the people and their ecosystem, as well as eliminated their traditional food sources.

Mr. Sinha concludes that one of the major problems for the Birhor is that they remain unaware of the developmental benefits and rights they can obtain from government agencies. This problem is caused by apathy within the agencies, he argues.