The Center for Global Nonkilling (CGNK) was created to promote the measurable goal of fostering a world free of killing. One of its research programs is to study societies that are reasonably free of killing, a close match-up in interests with this website. As part of that commitment, the CGNK organized an Exploratory Colloquium on November 16 – 17 to coincide with the American Anthropological Association’s 110th Annual Convention in Montreal.

Les Sponsel from the University of Hawaii organized, as part of the official AAA program, a panel of 11 speakers on Wednesday evening, November 16, focusing on nonkilling. Thursday the 17th, the CGNK held an all-day meeting of the Nonkilling Anthropology Research Committee, one of its research groups, at the University of Montreal. Both meetings significantly advanced the understandings of participants about the possibilities developing nonkilling societies. 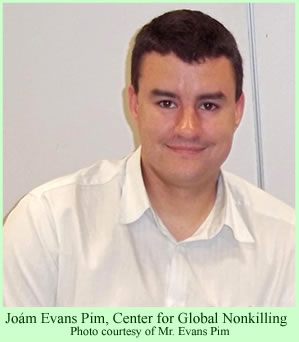 The best way to begin alerting visitors to this website about the work of the CGNK is through a review of the book Nonkilling Societies, edited by Joám Evans Pim, which was released on the center’s website last year. It is an effective contribution to the study of the social conditions in peaceful (nonkilling) societies that promote peacefulness. (The book is available for free download in a 1.5 mb PDF, or for purchase in paper copy). In weeks to come, additional reports will cover a selection of the papers and discussions held during the two very significant meetings.

Evans Pim provides a foreword which explains that the basic term “nonkilling societies” may seem a bit odd, but it dates back to Glenn D. Paige, a political scientist in Hawaii, who used the term in his book Nonkilling Global Political Science. Paige asked the critical question, “is a nonkilling society possible?” This book, and in a larger sense the Center, is dedicated to searching for the answer.

Evans Pim traces earlier uses of the term “nonkilling” in the anthropological literature, and he argues, quite justifiably, that killing and nonkilling are measurable concepts—they are clearly quantifiable. Homicide, after all, is an act that is hard to confuse with other types of violence, and it is normally counted the same way, wherever it occurs.

He points out that, although numerous scholars are apologists for violence, they are incorrect in many respects. They willfully ignore the arguments and scholarly evidence that do not mesh with their Hobbesian views. He does not mean to denigrate the work of anthropologists who sincerely focus their research on warfare, but the ones who openly deny the evidence from the literature about peaceful—OK, nonkilling—societies “are in effect apologists for war (p.21).”

Several chapters in the book deal with the basic issue of whether or not it is reasonable to claim that peaceful societies even exist. After all, humans are supposedly warlike—it is an adaptive, evolutionary advantage. Human nature is basically aggressive. We are territorial beasts. Men need to dominate women. Chimpanzees are demonic killers, and humans are therefore the same. History is dominated by wars, murders, and aggressive acts. Killing is the norm, and nonkilling the aberration. The arguments seem endless. The facts are supposedly irrefutable.

Except that a number of the essays in this volume demolish these preconceptions with facts that the apologists for violence do not want to consider. Among the chapters that focus on these themes are “Gentle Savage or Bloodthirsty Brute?” by R. W. Sussman and Dona Hart; “Not Killing Other People,” by Piero P. Giorgi; and “Nonkilling as an Evolutionary Adaptation,” by Douglas P. Fry. Most of the essays deal with these issues in one way or another.

Much of worth in this volume will have to be skipped in order to touch on the articles that discuss peaceful societies that are also covered in this website. Robert Knox Dentan, in a lengthy essay “Nonkilling Social Arrangements,” makes some very interesting observations about the way the East Semai teach their children to be peaceful. He says they don’t. Several times, he writes, he has asked adults how they teach social skills to their young people. Each time he asks, they deny teaching anything to their kids. The children simply accompany adults and learn by imitating their behavior.

Dentan adds that Semai adults don’t talk much about children who are older than babies, or even pay much attention to them—unless they show signs of losing their self control. Kids learn the skills of peacekeeping, “not because their parents teach them, but because their parents for the most part do not (p.144).” The children learn to be peaceable from older playmates—how to have elaborate play battles in which no one gets hurt, with the big kids showing the little ones how to hold their “swords” to avoid hurting others. Their play teaches them the differences between violence and posturing.

The Paliyans also receive attention in an essay by Peter M. Gardner, “How Can a Society Eliminate Killing?” The author characterizes Paliyan society as warm, with a lot of joking and teasing during work projects. People smile a lot when they are dancing, and they are able to calm one another through quiet speech.

Gardner notes that most extramarital affairs among the Paliyan do not result in big problems, simply because the men do not think of their wives as objects that they own. The spouse is independent and can do as she chooses. One man, informed of his wife’s infidelities, responded simply, “it is not my business (p.189).” Similarly, parents never act as if they own their children, who start making decisions about their lives when they are still quite young.

A key Paliyan concept is tarakkoravaa, which roughly translates as disrespect. Except for the infirm, the aged, and children, people are always held at the same level, with no one over another, no one a burden on others—all in order to avoid disrespect. The conflicts that people experience could perhaps be best phrased, in Paliyan terms, as instances of disrespect.

Gardner’s analysis of the Paliyan approach to respect and conflict resolution—people refuse to argue, they walk away from conflicts, they de-escalate strife—is profound. He says that we must look at the matter from the Paliyan perspective. When everyone handles their conflicts peacefully, he argues, no one interprets walking away from a problem as “backing down.” In their society, “there is no cost; there is no humiliation…. The Paliyan style of walking away from conflict within their own egalitarian society has an altogether different quality; it is an unambiguous act of strength, strength in controlling oneself (p.192).”

Gardner’s thoughts are characteristic of a lot in this volume. Alberto Gomes gives us a fascinating essay about an Orang Asli society, the Menraq, that has lost a lot of its former peacefulness due to changing conditions in which they live. Evans Pim gives an overview of peacefulness in island societies—the Ifaluk, the Tristan Islanders, and the Tahitians. This book, filled with many convincing observations and analyses, is a rich, rewarding, work to download to ones hard drive, to study carefully, and to read for enjoyment.

This is the first of a series of five articles about the Center for Global Nonkilling, an organization that holds very similar views to this website, though it is focused more on the quantifiable goals of killing and nonkilling, compared to this website which takes the broader, but less measurable, perspective of violence versus peacefulness. The other four articles in this series include: second, a review of Kirk Endicott’s paper on the Batek; third, a review of Alberto Gomes’ paper on the Semai; fourth, a discussion of Douglas Fry’s summary of the Panel Session of Wednesday evening, November 16, at the AAA convention; and fifth, a review of the CGNK Anthropology Research Committee meeting on Nov. 17.