Kirk Endicott delivered an engrossing paper that described the nature of Batek nonviolence, plus the conditions that foster it, at a panel session on Wednesday evening, November 16th, in Montreal. His presentation was part of the program “Challenging the Legacy of Innate Depravity: The New Tidemarks of the Nonkilling Paradigm,” held as part of the American Anthropological Association’s convention that week. The panel session included 11 presentations, a few more of which will be described in coming weeks. 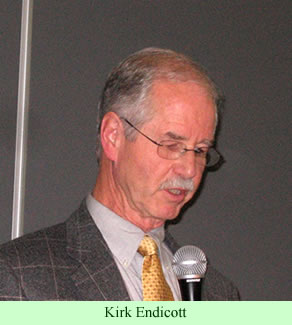 Endicott’s paper, “Peaceful Foragers: The Significance of the Batek and Moriori for the Question of Innate Human Violence,” was of particular interest for this website because of its careful review of Batek peacefulness. He opened by giving credit to Douglas Fry, who had gotten him involved in comparing two different hunting and gathering societies and linking those comparisons with the development of human behaviors.

In his paper, Endicott compared the Batek of Malaysia and the Moriori of the Chatham Islands. Both peoples did not participate in warfare, and both suppressed expressions of internal violence. His paper attempted to ascertain why they are peaceful, and how they maintain it.

His analysis of the Batek, roughly 700 to 800 people, focused on the ones living in the Upper Lebir River watershed of Malaysia. Their economy is, or was in the 1970s, based on harvesting wild fruits, hunting game animals, gathering yams, and collecting forest products, such as fragrant woods and rattan, for sale to traders. They moved about frequently, living in temporary camps for a week or two, each family inhabiting a separate lean to. The families would stay together or split apart, as circumstances determined. Despite the temporary nature of the camps, people were expected to share the foods they had hunted or gathered. They also provided assistance to one another whenever needed.

The Batek had no control over others, since they prized their individual autonomy. Endicott said, “The Batek considered all violence, aggression, and coercion of any kind toward other members of the Batek and toward outsiders as absolutely unacceptable.” Just like the Semai, the Batek believed that violence, and the threat of violence, was a characteristic of children and improperly socialized people. A Batek man indicated that they were prohibited from engaging in war and violence by their ancestors. They even proscribed hitting other people—it seriously violated their moral values.

The Batek believed that violent acts were prohibited by the thunder god, who would send thunderstorms down on the village if the prohibition was violated. An underground deity would be similarly offended by violence and send a flood to dissolve the errant camp. Offenders would also be punished by disease, sent by the creator god to people who acted violently. These prohibitions represent an unusual, “concentrated, sort of supernatural sanction,” the speaker said. Three different Batek gods cooperate to prevent violence. Furthermore, people who do act violently will not have their shadow souls taken to the afterworld when they die, Endicott was told.

The Batek taught their children to act nonviolently, though the youngsters sometimes did fight with one another. Adults believed they would grow out of this behavior, which they felt was normal. Parents would separate fighting children, then laugh to try and minimize the importance of the issues they were fighting about. Adults normally did not use physical discipline. By the time children were four years old, they had learned that, in their society, people just do not fight.

Endicott indicated that adults are able to settle their disputes peacefully. They often aired their conflicts loudly to the rest of the camp, in situations where everyone else could participate. If the dispute was not successfully settled, one or more of the people involved would simply move away to join another group. An individual who was frequently aggressive would be abandoned by the rest of the band, who might even flee from the aggressor, if that was the only way to resolve the problem.

It is significant to note that the Batek approach to controlling violence did, in fact, work most of the time. Endicott related one incident of violence, when two men had a fight about the wife of one of them. An older man tried to intervene, but almost everyone else fled to higher ground, fearful that the deity could decide to cause a disastrous flood.

The fear of being enslaved, or killed, by Malays helped restrain the Batek from acts of violence against aggressive outsiders. They had avoided Malay slavers in earlier times by running away, and were still used to fleeing at the first sign of approaching strangers. They continued this pattern of flight at the first suggestion of trouble during World War II when Japanese soldiers were stationed not far away, and during the Communist insurrection that followed the war.

Endicott argued that the Batek have developed elaborate controls on internal violence in order to maintain their close relations with one another. They depend on each other for survival. They realize that fighting could destroy their society. The absence of several factors in their communities may help militate against violence. Since they do not compete for scarce resources, they do not have that motive for fighting, he said. They also have no groupings that could lead to feuding behavior. Also, they have no leaders, whose ambitions could lead to conflicts. Furthermore, they have no beliefs in sorcery or witchcraft that could lead to violent, retributive punishments.

Endicott turned to discussing the reported peacefulness of the Moriori, a society that used to exist on the Chatham Islands, 500 miles away from New Zealand. After describing the relatively peaceful Moriori, who were decimated by invading Maori from New Zealand in 1835 and either killed or enslaved, Endicott provided some interesting comparisons between the peace systems of the two peoples.

For instance, both groups lived in relatively isolated locations, protected more or less from attacks by outsiders. Both were immediate return foragers who depended on one another for their subsistence. Thus, in both groups, people had similar motivations—survival—for maintaining harmony with others in the community. In both, people believed that superhumans would react against those who fostered violence. Both societies had decided, quite consciously, to control aggression and violence, both internally and externally. In sum, both societies devised effective ways of resolving disputes and living peacefully together.

This is the second of a series of five articles about the Center for Global Nonkilling, an organization that holds very similar views to this website, though it is focused more on the quantifiable goals of killing and nonkilling, compared to this website which takes the broader, but less measurable, perspective of violence versus peacefulness. The other four articles in this series include: first, a review of the book Nonkilling Societies issued by the CGNK; third, a review of Alberto Gomes’ paper on the Semai; fourth, a discussion of Douglas Fry’s summary of the Panel Session of Wednesday evening, November 16, at the AAA convention; and fifth, a review of the CGNK Anthropology Research Committee meeting on Nov. 17.