Research on the hornbills of the Vazhachal Forest in Kerala, reported 15 months ago, has been so successful that the program has recently been expanded, a credit to the Kadar employees who do much of the field work. According to an article in The Hindu last week, the hornbill monitoring program has been extended outside the Vazhachal region to include the Edamalayar, Nelliyampathy, and Parambikulam areas as well. 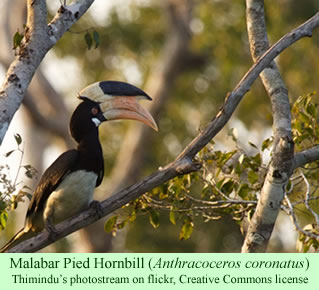 The forest is an important habitat for the large birds, which are important for overall ecosystem health due to their habits of widely dispersing fruits and seeds. Hornbills are known for having very large casques on their upper mandibles.

The 20 Kadar who are employed to survey the forests near their homes have been trained to note evidence that suggests the presence of different hornbill species, such fecal matter and the remains of food around potential nest trees. Suspect sites are observed at least once a week, and monitored until eggs are presumed to have hatched. According to Dr. Amita Bachan, from the Western Ghats Hornbill Foundation, the forest knowledge of the Kadar is an important ingredient in the success of the program.

The Kadar found 57 hornbill nest trees last year, and they are searching for more. While they move around through the forests on their surveys, they are trained to watch for other key wildlife species, such as tigers and lion-tailed macaques.

The nest monitors write down descriptions of the nest trees, details about the entries of female birds, whether or not the females appear to be in the nest cavities, measurements of the trees, heights of the nest holes, and details about the nearby vegetation and terrain. They also record the hatching of chicks and possible threat factors at the nests.

Dr. Balan has written that hornbills are particularly threatened by any loss of forest habitat, and by factors such as deforestation, conversion of the land to plantation agriculture, clearing for shifting cultivation, or logging.

The season for monitoring the nesting hornbills, which used to be from January through May, has begun in December this year due to climate changes.