Papers by Kirk Endicott and Alberto Gomes, reviewed here in recent weeks, represented only part of the richness of information about peaceful societies available at a panel session of the American Anthropological Association in Montreal last month. Rather than continue to review the nine additional papers, all of which were quite insightful, it might be best to simply summarize the rest of them. The full list of papers presented at the panel session is still available on the AAA website. 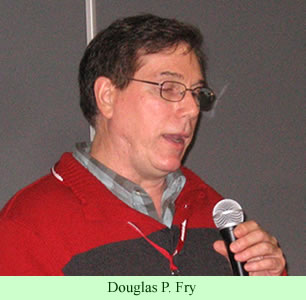 “Challenging the Legacy of Innate Depravity: The New Tidemark of the Nonkilling Paradigm,” the panel organized by Prof. Les Sponsel and the Center for Global Nonkilling, concluded with excellent summaries by discussants Kirk Endicott and Douglas Fry. A quick summary of Fry’s remarks should serve to best convey many of the essential points made by the speakers.

Instead of reviewing the individual papers, Fry focused on the three major themes, or topics, that he had heard during the evening. Those three topics included, first, our biases about the issue of whether or not humans have an innate tendency to be a killing or a nonkilling species, and how our attitudes about the issue may affect our perceptions of the possibilities of peacefulness. The second topic, he said, was a fundamental question: is a nonkilling society really possible? The third was the logical corollary of the second: how can societies move toward a state of nonkilling?

He began his exploration of the biases relating to nonkilling versus peacefulness by referring to a work by Marshall Sahlins, a prominent American anthropologist. Sahlins recently published a pamphlet that describes how the belief in human innate aggressiveness dates back in Western thought at least to the Greek Cynics. It has continued forward through the ideas of St. Augustine, Thomas Hobbes, and other thinkers to the present day.

Fry discussed the prevalent concepts held by writers who champion this belief. Authors have used such descriptions of people as “the killer ape,” “man the hunter,” “demonic males,” “constant battles,” the “dark side of man,” “the most dangerous animal,” “war before civilization,” and so on. Much of that literature about the supposedly inherent violence in human societies reflects the insidious belief, in the West at least, that people are basically aggressive. It is one of our cherished cultural myths.

The speaker said that these ideas are variations on the same myth, which helps promote the perpetuation of such an erroneous idea. President Obama repeated that myth in his Nobel Peace Prize acceptance speech a couple years ago. Fry argued that there is a lot of evidence against the myth. He suggested that arguments for innate human aggressiveness may be ingenuous, for many people have their own reasons for wanting humanity to appear to be violent.

When he addressed the second topic of the evening, is nonkilling really possible, he distinguished between societies that are internally peaceful and those that are nonwarring. Some societies are both while some are one or the other, an important distinction. He answered the basic question with a qualified yes, nonkilling societies do appear to be possible.

He agreed with a point made by Robert Knox Dentan, that some of the nonkilling societies like the Semai do not identify themselves as being highly peaceful. But others, Fry argued, do have explicit ideals of themselves as peaceful. He used, as an example, the Xingu peace system in Brazil, where people in the communities involved have strong beliefs and constraints preventing warfare among themselves. The Xinguanos have been quoted as stating that they think violence is immoral. They think of themselves as civilized people—they are people who do not fight wars—in contrast to the “wild” Indians outside the Xingu area who go to battle and kill one another.

Among the Zapotec of the La Paz village, a community that he has studied personally, violence is the exact opposite of respect, which is an ideal they cherish. Furthermore, the residents of La Paz view themselves as pacifists (pacificos), a word that they use unambiguously to mean a peaceful people. Fry reasoned that in some societies the people cherish their peacefulness but in others, like the Semai, they may act peacefully but do not clearly espouse such values.

He wondered if societies that are not as secure in the peacefulness of their environments, or are more afraid of aggression from others, may be the ones that develop patterns of frequently reiterating their beliefs in their own nonviolence. As a consequence, they may be the ones to develop strong traditions of respect. He speculated that people whose societies have been peaceful for a very long time may have gotten out of the need for frequently repeating peaceful beliefs.

He provided additional examples of how the prevailing ideologies in the West focus on violence, rather than peacefulness, as normative. He then moved on to his third topic: how to move societies toward less killing and more peacefulness. Fry reminded the audience of an excellent example of a worldwide program which was set up by the United Nations General Assembly to attempt to develop cultures of peace. He quickly reviewed the elements which would be necessary for a culture of peace to take hold, as outlined by the UN resolution, such as peace education, sustainable development, human rights, gender equality, democratic participation, open sharing of information, and so on.

In response to some of the points made by the other speakers, he argued that working for peace needs to take place at all levels, both at the micro scale, in small, peaceful communities, and at the macro scale of international relations. Both are essential to the formation of a peaceful world. To summarize, he said that various speakers had described specific ways that societies work toward peacefulness, such as with effective strategies for avoiding and resolving conflicts. He concluded that enough examples are out there to show that nonkilling societies are truly possible.

This is the fourth of a series of five articles about the Center for Global Nonkilling, an organization that holds very similar views to this website, though it is focused more on the quantifiable goals of killing and nonkilling, compared to this website which takes the broader, but less measurable, perspective of violence versus peacefulness. The other four articles in this series include: first, a review of the book Nonkilling Societies issued by the CGNK; second, a review of Kirk Endicott’s paper on the Batek; third, a review of Alberto Gomes’ paper on the Semai; and fifth, a review of the CGNK Anthropology Research Committee meeting on Nov. 17.