How do scholars and students of peaceful, nonkilling societies overcome the objections of “deniers,” individuals who refuse to admit even the possibility that such peoples exist? The question captivated the members of the Nonkilling Anthropology Research Committee of the Center for Global Nonkilling (CGNK), meeting in Montréal on November 17th. That one word summarized the difficulties in reducing, if not completely eliminating, human killing. 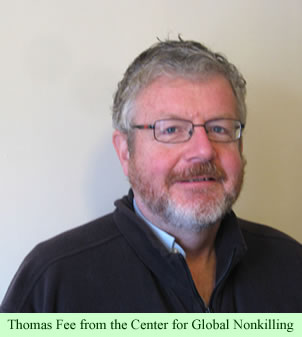 Overcoming skepticism and convincing people of the value of studying peaceful and nonkilling societies is one of the central concerns of the members of the Research Committee—prominent anthropologists and scholars who express a firm belief not only that nonkilling societies exist, but that their examples can be useful to peoples worldwide. The basic agenda for the day was to explore ways of further promoting this message. Thomas Fee from the Center for Global Nonkilling (CGNK)moderated the session.

The first goal of the meeting was to explore the socio-cultural causes of killing and nonkilling. How can we advance research into those causes? A second, and equally important, goal was to probe for ways to develop societies where killing, or even the threat of killing, is reduced and eventually abolished. How can killing societies be transformed into nonkilling ones? Why do some societies change, from one condition to the other, sometimes becoming more killing, sometimes less? What strategies can the committee prepare that will advance the research and dissemination of information about peaceful, nonkilling societies?

Hosted by Prof. Patrice Brodeur at the Université de Montréal, the meeting prompted many suggestions for possible steps that might further the goals of the group. This meeting on Thursday the 17th was a follow up to a successful panel session on nonkilling societies the previous evening at the American Anthropological Association’s annual convention in the city.

The first major topic discussed by the participants was the need to better promote the idea of nonkilling societies, and a nonkilling subfield of anthropology. One suggestion was to foster either the establishment of a section, or of an interest group, devoted to nonkilling anthropology within the American Anthropological Association itself. Several committee members will be looking into that possibility.

A second proposal, quite closely related, was to increase the membership of the Research Committee itself. Graduate students and anthropologists who think they might be interested should contact the CGNK and express interest in the work of the group. Committee members expressed a special need for more women, minorities, and people from developing countries to be part of the Research Committee.

One member made the suggestion that faculty who teach courses relating to nonkilling/peaceful societies could share their syllabi. A model syllabus for courses on nonkilling societies will then be prepared and shared on the CGNK website, along with other suggested readings and materials.

Several participants discussed possible markets for articles about nonkilling and peaceful societies, both scholarly pieces and works written for broader, more popular, audiences, both in magazines and in newspapers. One suggestion, for people interested in placing short, op ed articles in newspapers, was to contact the group PeaceVoice, an initiative of the Oregon Peace Institute.

PeaceVoice, according to their website, tries, usually with considerable success, to place submitted articles about peace related subjects in newspapers and online news outlets throughout the U.S. Articles prepared for a newspaper audience about nonkilling/peaceful societies would doubtless be considered, though PeaceVoice gives priority consideration to members of a partner organization, the Peace and Justice Studies Association. Some of the recent articles distributed by PeaceVoice have been placed in a large number of newspapers. Their website suggests that one of the keys to getting a submission accepted by the news media is for it to be brief and related to a topic of current news interest.

Members of the Research Committee discussed participating in meetings of other closely related organizations, such as the European Association of Social Anthropologists, which is meeting at Nanterre University in Paris, in July 2012. Another suggestion was to consider the Conference on Hunting and Gathering Societies (CHAGS), meeting in Liverpool in June 2013. Smaller, regional workshops might be supported by grants from the School for Advanced Research. Support might also be available from the Wenner-Gren Foundation.

Some suggestions were quite captivating. Why don’t we stop genocides? (How does anyone answer that totally valid question?) Why don’t we discuss the violence in sports? Why do the news stories on PBS so rarely include anthropologists among the experts they consult?

Participants suggested other types of media outreach, web site developments, linkages, connections, and outreach of all sorts. As the day wore down, Mr. Fee helped participants summarize the many points that had been made, and secured as many commitments as possible to help address the issues raised.

The CGNK has formed 18 other, similar, subject discipline committees, comparable to the one for anthropology, which include a total of about 600 scholars worldwide. The Anthropology Research Committee has 52 members, of whom 11 were able to attend the Montréal meeting.

This is the fifth of a series of five articles about the Center for Global Nonkilling, an organization that holds very similar views to this website, though it is focused more on the quantifiable goals of killing and nonkilling, compared to this website which takes the broader, but less measurable, perspective of violence versus peacefulness. The other four articles in this series include: first, a review of the book Nonkilling Societies issued by the CGNK; second, a review of Kirk Endicott’s paper on the Batek; third, a review of Alberto Gomes’ paper on the Semai; and fourth, a discussion of Douglas Fry’s summary of the Panel Session of Wednesday evening, November 16, at the AAA convention.