A Birhor stall at a big trade fair in Jamshedpur, the largest city in northeastern India’s Jharkhand state, was a hit with visitors to the show in recent weeks. In an industrial center famed for Tata Steel works and other major businesses, a local NGO persuaded five Birhor people from a remote village to come to the trade fair and display their craft objects. 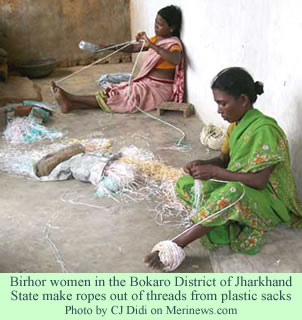 They evidently made a great impression. Ramdas Birhor, 30, was the only one of the five Birhor guests who spoke the national language. “Our tribesmen can’t speak Hindi,” Ramdas told a reporter. “Most haven’t ventured from their forest area in their whole life. Five of us came here as we are handicraft experts.”

The Enterprise Jharkhand 2012 trade fair was held at a place called the Gopal Maidan, a fairgrounds in Jamshedpur. It was a showcase for such things as the latest motor vehicles and earthmovers, but the Birhor booth attracted a lot of attention. Over 200 hand-crafted products, such as ornaments, bags, jewelry, and tuppas, were sold to over 3,000 visitors.

An article in the Telegraph from Calcutta explained that the Birhor normally fabricate their craft works out of natural materials. Ramdas pointed out that their products are made from forest creepers such as the chhihor. The tuppa, made out of rope fibers, is one of their unique creations. They form ropes into vessels that can store liquids, then paint them so they can be used as objects for decorating the interiors of homes. The Birhor make jewelry out of creepers that they then dry and press into wood block frames. Out of all the things that they sold at the booth, the bags were the only objects that they do not, themselves, use.

An official from Tata Motors, Ratnesh Singh, commented, “I came to the fair to have a look at the automobile stalls. But there was a surprise awaiting me at the Birhor kiosk.” He bought a tuppa and a bag.

Bringing the five Birhor people 60 km. into the big city from their village of Tumangkocha, in the Musabani block of the Ghatshila District of the state, was the brainchild of an NGO called SEEDS—Socio Economic and Education Development Society. The group has been working with the Birhor for the past 11 years.

Dr. Shubhra Dwivedy, the secretary of SEEDS, said that many Birhor are still shifting cultivators. “So when food supply of a forestland is exhausted, they head towards another. Convincing five persons to come here required days of persuasion.” She said she was pleased that the Birhor booth at the fair had received so much attention.