Compromising with the Amish, which has long been important in Pennsylvania’s Lancaster County, now seems to be taking hold in Kentucky too, where legislators are crafting a law that will respect Amish rights as well as general safety concerns. 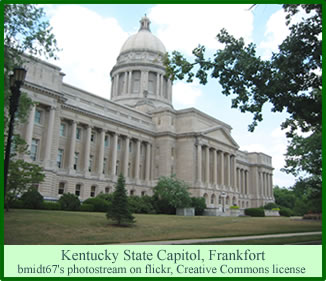 While most Old Order Amish have no problems with displaying the slow moving vehicle triangles on their buggies, which are highly visible at night, the Schwartzentruber Amish refuse to do so. They have been sentenced to jails in Kentucky repeatedly for disobeying the existing state law on the matter. They lost their case in the Kentucky Court of Appeals and have appealed to the state Supreme Court. Meanwhile, they have also applied to the legislature for relief. There is real progress at the state capitol in Frankfort.

Senate Bill 75, sponsored by Kentucky Senator Ken Winter, was recently passed unanimously. It has been sent to the House, where similar legislation is under consideration. It allows the Amish to outline their buggies with reflective tape in lieu of the bright orange triangles.

Amish farmer Jacob Gingerich, from near Mayfield, who has been one of the major lobbyists for the Amish cause, had been sentenced to the Graves County Jail for refusing to pay the fines that the local magistrate had imposed because he wouldn’t put the triangle on his buggy. Gingerich indicated that “we’re very pleased with it,” meaning the senate bill, and “we feel like we’ve got a fairly good chance in the House.”

Sen. Damon Thayer expressed his pleasure that the senate could work out a bill which protects the public interest in avoiding accidents between motor vehicles and slow moving buggies at night, as well as respect the religious scruples of the Schwartzentrubers.

Members of the Amish community, observing the passage of the bill from the senate balcony, were obviously pleased. They also attended a meeting of the House Transportation Committee, where similar legislation, House Bill 133, was scheduled to be discussed. Consideration of that bill was delayed because the sponsor, Rep. Jimmy Bell, was sick.

Press reports last week indicated that the quick passage of the Senate bill was mostly due to a very effective letter written by Mr. Gingerich to 138 lawmakers at the state capitol. Mr. Gingerich, of course, did not use a computer to help compose his letter. Instead, he used pen and paper to write out by hand his appeal to each law maker, expressing, apparently quite effectively, his reasons for refusing to put a triangle on his buggy.

He explained that the triangle represents, in his belief, the Holy Trinity, and the Amish can’t display religious symbols like that. Furthermore, “the color of the emblem is fluorescent orange, and our church forbids the bright, loud and gaudy colors,” he wrote. “Therefore, we cannot in good conscience use the slow-moving vehicle emblem.”

He added in his letter, “it is our religious belief to abide by the law of the land, as long as it does not interfere with our religion. So, now [we] are asking the legislators to pass a law that we can abide by.” He and 17 other Amish men took buses to Frankfort to watch the legislators work on the contentious issue.

Senator Kathy Stein said that receiving her letter from Mr. Gingerich was “one of the highlights of my legislative experience.” Senator Thayer seconded that. He said that the letter from Gingerich was the key to the successful passage of the legislation, though he added that numerous other interest groups, such as the Catholic Church, the American Civil Liberties Union, and representatives of the Tea Party all pushed for it too.

Sen. Thayer was effusive about the letter. “It could be quite possibly the best example I’ve ever seen of citizen advocacy on behalf of a bill,” he said. “It was this letter, [a] one-page letter” that made “as good a case as I’ve ever seen for passage [of] legislation.”

Senator Winters, the sponsor of the successful bill, said that tests show that outlining the dark colored buggies with gray or silver reflective tape made them quite visible at night from over 1,000 feet away when motor vehicle lights shine on them. This compromise seems to satisfy both the concerns about road safety at night and the Schwartzentruber objections to the offensive triangular symbols.

House Speaker Greg Stumbo has already indicated his support for the compromise proposal, which suggests that it has a good chance of passage. Once it is passed and signed by the governor, the law would go into effect immediately.