It may seem trite to say that no peaceful society is perfect, but developments last week relating to the aggressive Amish cult in Bergholz, Ohio, and its strange rampage of hair and beard cutting attacks last fall, certainly support such a truism. 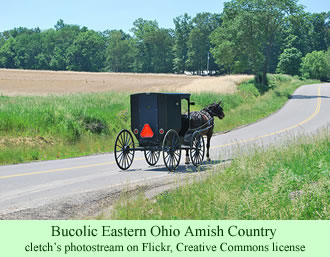 Sam Mullet, Sr., the Bishop of the Bergholz Amish Church district and the alleged ring leader of the assaults that occurred in the bucolic Amish settlement of eastern Ohio, has been caught taking free legal assistance, despite the fact that he is, in fact, a rich man. In March, Mr. Mullet sold oil and gas leases on 800 acres he owns near Bergholz for more than two million dollars and the courts, which had been providing him with free public legal assistance, got provoked.

The story of the beard and hair cutting incidents captured international attention back in October 2011. Groups of Amish thugs, transported by hired vans, arrived at the homes of Amish people who appeared to be resisting the will of the bishop, the lay leader of the church district near Bergohlz. Numerous incidents were reported to the police by Amish people who would not normally bother civil authorities with their complaints. They prefer to handle disputes within their own community.

But these attacks scared them. Groups of Amish men would invade a home in the evening, grab the men they were targeting, hold them down, and forcibly cut their hair and beards with scissors and battery powered clippers. Minor injuries were reported in the scuffles, and some women also had their hair cut. Long hair and beards are essential to the self-images of many Amish people.

The huge Amish settlement in eastern Ohio was, to put it mildly, terrorized. The Federal Bureau of Investigation soon became involved because the incidents appeared to violate federal laws. The FBI ultimately charged Sam Mullet and 15 of his followers, 9 men and 6 women, with violations of the Hate Crimes Prevention Act, with destroying evidence, and with lying to agents. Mr. Mullet and his son Lester Mullet have been deemed dangers to the community and have not been released on bail.

Reports last week about the continuing saga in Ohio Amish country have covered the legal wrangling related to two issues. The government wants to keep Mullet and key members of his group behind bars until the upcoming trial. Mullet and his son, through their attorneys, are arguing that they should be free on bail. The other issue has been whether or not Mr. Mullet, Sr., should have to pay for his legal assistance.

At first, when the news came out that Sam Mullet had raised a small fortune, the government moved in court to revoke his free public defender, claiming that he had been less than honest about his financial status when he applied for the public assistance. Court documents show that Mullet had used the funds from the gas and oil lease to pay off outstanding debts and mortgages.

Federal district judge Dan Polster in Cleveland ruled on Monday last week that Mullet must, from now on, pay the standard rate of $250 per hour if he chooses to continue to use the assistance of the same attorney. Furthermore, the judge ruled that he has to pay $125 per hour for all the work the public defender has done so far for him.

Judge Polster also agreed with the FBI contention that Sam and Lester Mullet need to remain behind bars until the trial, scheduled for August 27. While they are accused of destroying evidence and lying to investigators, the primary reason for the denial of bail is the alleged danger that they pose to the community.

Sam Mullet’s public defender, Ed Bryan, has appealed the detention order, claiming that the bishop poses no threat to anyone, he is not at risk of fleeing, and he has strong ties within the Amish community. Lester Mullet’s attorney, Damon Billak, said that his client is the sole provider for his family, he is desperately needed for spring farm work, and his incarceration is posing difficulties for his family due to his wife’s pregnancy.

The prosecutors strongly disagree. They said that Lester Mullet eagerly participated in the attacks last fall and has indicated he would do so again. A transcript of a phone call he made from the jail indicated he and the other participants had laughed about cutting off only half a victim’s beard. “Given what we know about Lester Mullet’s role in these attacks and his willingness to obstruct the government’s investigation, there is simply no condition or set of conditions that will reasonably assure his attendance at court proceedings or the safety of a community that has been terrorized by this violence,” the prosecutors wrote.

They had similar words about his father, the bishop of the community. “The evidence has demonstrated that this defendant and his followers have not embraced the traditional Amish principles on nonviolence and forgiveness,” the prosecutors wrote. “The possibility of a violent encounter, this time with law enforcement, should not be readily dismissed.” Strong words about members of the Amish society, whose fanatical commitment to peacefulness is quite well known.

The 6th U.S. Circuit Court of Appeals in Cincinnati agreed with the district judge. A three-judge panel of the Court of Appeals noted that, by his own admission to the media, Sam Mullet had prior knowledge about the intended assaults and “he could have stopped the attacks but he did not.” The judges noted that he had violated other court orders, threatened the life of the sheriff of Jefferson County, and controlled the members of his community so closely that no one would speak with the FBI without his explicit permission.

The three judges wrote that Mullet “further admitted that the attacks were in retaliation for other community members’ failure to adhere to his decisions, and he claimed he should be permitted to punish these people. And while Mullet may interpret the evidence differently, there is evidence that he orchestrated or participated in the offenses.”