A group dedicated to assisting devotees of Lord Ayyappa announced last week plans for a major pilgrim assistance center near Sabarimala, India, that will be combined with a facility for supporting tribal peoples, primarily the Malapandaram. The new facility will be built at Koonamkara, located on highway 67, the Perinad-Pampa main trunk road, just 22 air kilometers from the pilgrimage center. 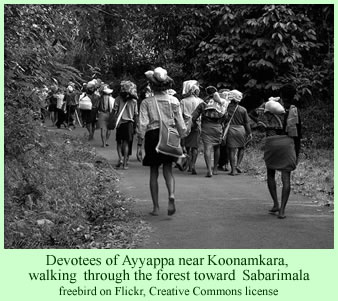 Sabarimala and the temples in the surrounding communities host approximately 45 to 50 million devotees of the Hindu deity Lord Ayyappa every year, the largest pilgrimage in the world. The group, Sabarimala Ayyappa Seva Samajom (SASS), according to its website, is a volunteer charitable trust that works to support the welfare of pilgrims who journey to visit the temples dedicated to their deity.

Volunteers from the group provide drinking water, food, information, accommodations, and medical assistance at camping places, bus stands, railroad stations, and other places where pilgrims may need help. SASS already opened a facility for pilgrims at Koonamkara in 2009, but the new buildings will allow the group to greatly expand the scope of its services.

According to Kummanam Rajashekharan, the general secretary of SASS, the group has a number of ambitious goals for helping tribal children at Koonamkara. He said that nearly 350 families, 3,650 people, live in the nearby hamlets of Sayippinkudi, Chalakkayam, Siffan, Attathode, Perumbanmoozhi, Vimmaram and Gavi. Other sources have indicated that many of those tribal families are Malapandaram.

The SASS project will provide food for the children as well as schooling and healthcare. The group hopes to make the children aware of the social mainstream of modern India and improve their social status. Mr. Rajashekharan indicated to the press that the center, to be located on an 18 acre hill, will cost an estimated 30 crore rupees (US$5.7 million).

He said that helping improve the welfare of the tribal peoples “is the duty of every Ayyappa devotee and hence SASS has given top priority to the … project.” The proposed school facility would provide accommodations for the children and food, as well as an education.

The facility will focus at first on primary age children. The SASS plans for the curriculum are that the school should emphasize the local natural environment, including such subjects as science, hydrology, wildlife, forest protection, and conservation. Initially it will include a play school and only primary education, but SASS plans to expand it to include instruction for older people on subjects such as empowerment of women, childcare, and the indigenous cultural heritage of the local people.