Older Nubians are upset about the way young people are demonstrating to dramatize their rights—such approaches are contrary to the Nubian tradition of peacefulness, according to an interesting news feature published last week. Hannah Allam, writing for the McClatchy Newsfeatures, covered a number of angles about Nubian claims and grievances that supplement earlier reports. 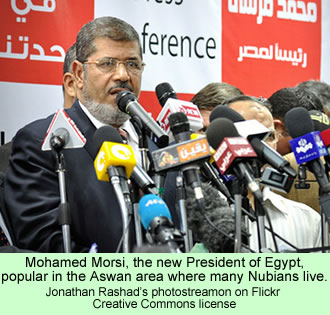 She writes that Mohammed Morsi, the new Egyptian President, carried the Aswan district with 52.4 percent of the vote. The Aswan Governate has many Nubian, as well as Arab Egyptian, voters. It is not clear yet whether Morsi will take any interest in the problems of the Nubian Egyptians, since overall they represent a small minority in the population of the nation.

The grievances of the Nubians are deep-seated. They resent the fact that former President Gamal Abdel Nasser ordered the construction of the Aswan High Dam, flooding out the old Nubian villages. Then he named the vast reservoir after himself, Lake Nasser. The Nubians view that as an insult to the indigenous people who were displaced from their homes. “When someone dies, you put HIS name on the grave, not the undertaker’s,” said Yahia Zaied, 26, a Cairo-based activist who hails from Egypt’s southernmost village, Adindan, along the Sudanese border.

The Nubians also resented the fact that the famed Nubian Museum, in Aswan, was closed to them for any display of their current cultural events. But with the social changes occurring in Egypt after last year’s revolution, the government has become more flexible on that score. Nubians now have planned a lecture series, plus other events in the museum, that assert their own place in a facility dedicated to their history.

Egyptian officials even tried to omit the word “Nubian” from the official name of the museum when it was proposed, but the UN threatened to block funding unless it was restored. The Arab rulers got even, however, by installing a tablet at the entrance to the building describing the conquest of Nubia by Pharaoh Rameses II over 3,000 years ago. His legacy was celebrated by the famed temple complex at Abu Simbel, which was moved up out of the way of the flood waters in the 1960s.

The activism of the younger generation of Nubians, which focuses particularly on the right of return to farmlands along the Nile, has become more effective in recent months. They successfully pressed authorities, suspicious of secessionist plots, to ease off on restrictions against their community. A group of Nubians were able to register for a business partnership with Nubians south of the border, in Sudan.

Nubians are now being allowed to get deeds to the houses built for them by the government, which they’ve been living in since they were forced out of Old Nubia in the 1960s. They are developing instructional programs to openly teach the Nubian language.

The young Nubian activists are becoming impatient with frequent, but unfulfilled, promises to help them move into new villages along the Nile. They are taking action themselves. They are pooling their own funds into collectives that are buying plots of farmland along the Nile, and they are encouraging Nubians to go back to the land, the traditional locus of their culture. In essence, they are challenging their elders, who have been holding out hope for government assistance, by doing things themselves.

Mabrouk Mahgoub Amara, a 38 year old activist leader, put on a traditional white gown to show off a plot of reclaimed farmland in Abu Simbel, south of Aswan in the heart of Old Nubia. “We’re doing it on our own,” he said. “We’re not waiting for the government to move us again. I feel that the spirits of my ancestors roam around me here. I imagine our lands underwater, and it makes me dream. This hope I have now, I really want to see it implemented in changes.”

But the tactic of promoting active demonstrations is still quite controversial among older, more traditional Nubians. Last September, Nubian demonstrators set fire to the major government building of the governor of Aswan, in the city, and they blocked traffic during their protests. But the younger Nubians feel that such demonstrations have been useful. They argue that it is fine to worry about ancient monuments, but the lives of the living also need to be considered.