A minister from the government of Kerala, in India, visited a couple Kadar colonies in her state last week and promised to allot lands to the people. P.K. Jayalakshmi, Minister for Welfare of Backward Communities, visited the Vachumaram and Pukalappara colonies near Athirappilly to announce that she had started formal procedures which would give the people tracts of land. She said the donations would not disturb any ecologically sensitive areas. 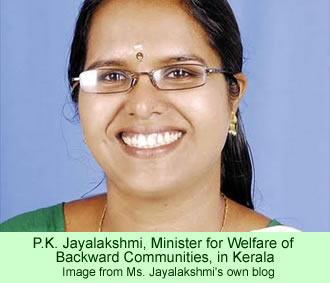 The Kadar gave the minister a warm welcome. They spoke with her about their problems, and she promised that she would soon address their concerns. Their issues included a lack of drinking water, the availability of kerosene, the cutting of trees, inadequate health and medical assistance, depredations of their crops by monkeys, and the over consumption of alcohol.

Ms. Jayalakshmi said that discussions about alcohol had already taken place in her department, and she promised that its sale in the colonies would be stopped. She told the Kadar, “Alcoholism has been taking a heavy toll on tribal people. Immediate measures will be taken to curb increasing alcoholism in tribal colonies with the help of police and [the] excise department.”

News stories in May 2011 revealed that alcoholism, along with tuberculosis, had become a major health concern for the Kadar, particularly the women who see the way it is devastating the lives of their husbands and families. The minister spent six hours visiting the Kadar communities, where she also announced that electric service would soon be installed.

She visited a government welfare school in Athirappilly to announce that a pre-primary education package had been prepared for very young Kadar children. It uses the Kadar language and bases its segments on Kadar traditional knowledge. She showed off two books for kids—“My Home” and “Forest My Land—plus a workbook, sets of flash cards in both the Malayalam and English languages, and a Hornbill floor puzzle for the kids.

Although there are 35 different tribal societies in Kerala, this is the first time the state government has developed learning materials specifically targeting the children of one of them. Ms. Jayalakshmi gave uniforms to the students in front of several other officials and elected representatives.

The interest of Ms. Jayalakshmi in the tribal community is a reflection of her own background. She was elected to the state legislative assembly in 2011 representing the Mananthavady constituency, in the Wyanad District of the state, and was, herself, born into the Kurichya society. At 29 years of age, she is the youngest member of the state government, and she is the first Adivasi (tribal) person ever to become a government minister in Kerala.