Ohio has now topped Pennsylvania in having the most Amish of any state in the U.S., 60,233 to 59,078, according to three scholars who have just completed a study of their population. Professor of Rural Sociology at Ohio State University Joseph Donnermeyer, the leader of the study, indicated when he released the figures that the growth rate of the Amish is 3.1 percent per year. That figure is vastly higher than the population growth of the state or the rest of the U.S., which are less than 1 percent. 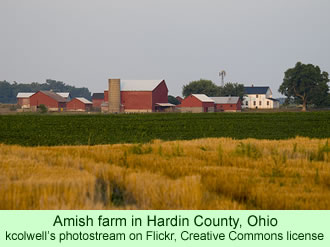 He attributes the growth to the obvious fact that the Amish have large families, and about 85 percent of their children remain within their group. Donnermeyer added that 42 percent of the population of Holmes County, Ohio, is now Amish, and he predicted that within 15 years they may form the majority. It would become the first Amish-majority county in the United States.

Because the population of Amish is doubling every 22 years, and they now have about 251,000 people, their numbers could reach a million by the middle of this century. “For the past 10 years, I’ve told myself that they can’t keep growing at the pace they are,” Donnermeyer admitted, but “I’ve been wrong every single year.”

The three scholars estimated the Amish population by studying the directories and other works published by the different church districts. “In Holmes County, there’s a directory that looks like the yellow pages for New York City, it’s so large,” Donnermeyer said.

The study investigated other issues than just sheer numbers. The three researchers found that as the Amish have shifted, in many areas, away from farm work and into construction and other trades, the sizes of their families have not shrunk. However, in Ohio’s Hardin County, the Amish have tended to not abandon working on their farms.

Instead, they now raise more garden produce, which they can do on less than the 100 acres that they formerly used for traditional farming. They sell their vegetables and fruits at the Scioto Valley Produce Auction, in Kenton, a facility run by the Amish themselves. The auction operates during the summer every Tuesday and Friday.

Daniel Bontrager, an Amish bishop and one of the men responsible for running the auction, explained that “the young people needed something to do, and we’d rather all stay here together and stay close. The auction helps us do that.” Now in its second summer of operation, the auction attracts hundreds of customers from far and wide. Young Amish in Hardin County, about 40 miles northwest of Columbus, continue to work near their homes, either at farm work, for sawmills, or in other craft jobs.

Bishop Borntreger said he did not need a scholarly study to tell him that their numbers are growing rapidly. There were four church districts in their settlement 30 years ago and now there are eight. Speaking of the farming in his county, he said that since many have switched to raising garden produce, a family can now support itself successfully with 10 acres.