Crowds came to the Hyatt Regency Hotel in Chennai last week to visit Pollinator 1, a bee festival that celebrated the art and science of beekeeping plus the culture of honey gathering by groups such as the Paliyan. The much publicized event, the first beekeeping festival held in India, attracted many celebrities. 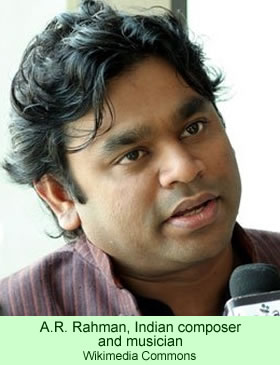 Oscar-winning musician, composer, singer, songwriter, and music producer Allah Rakha Rahman inaugurated the event. He said he thought the exhibition was “really great.” Highlights of the opening ceremony included a bee song by a student of Rahman’s plus some bee-themed poetry.

Four years ago, the organizer of the event, Rajiv Sethi, noticed a lot of wild bee hives hanging from the beams of an abandoned building when he visited the site where the Hyatt Regency Hotel was going to be built. “I was inspired by the fact that the bees had obviously found ample nectar in a concrete jungle to make their home there,” he said. “Their resilience led to this concept.” Sethi is the chairman of the Asian Heritage Foundation.

He expressed concern that many other countries are quite aware of the ecological importance of honey bees, as well as the uses of honey,but India has taken them for granted. Sethi told one newspaper that the extensive use of fertilizers in Tamil Nadu, of which Chennai is the capital, is affecting the health of its bees.

An artist in his own right, Sethi placed a lot of bee-related art works around the hotel to enliven the festival. “The honeybee is the planet’s most important pollinator—bees pollinate around 80 per cent of all flowers, some 24,000 varieties, including all our fruits, nuts, vegetables and fibres,” he said. “We humans should learn ‘live and let live’ from these creatures — the bee takes nectar from a flower without harming it, and returns the favour by cross-pollination.”

The festival included serious presentations by entomologists, events for kids, an appearance by the Bee Goddess, and entertainment for everyone. A bee-themed shadow puppet show told the story of a place where all the flowers, then the bees, disappear. Musicians captivated the adult audiences, and a children’s theatre group transformed the stage into a fairy tale.

In addition to 55 exhibits in the hotel relating to bee keeping and honey production, Sethi organized sessions on the traditional, indigenous uses of honey. He included in the festival 72 representatives of the tribal societies of Tamil Nadu, including the Paliyan.

Indupalayan, a Paliyan man who came from the Theni district of the state, indicated that, for him, life is still focused on venturing into the forest, especially to collect wild honey. In addition to the Paliyan, some Kurumba and Irula also attended the festival, people who live farther to the north in the Western Ghats. One of the benefits of the festival for the tribal groups was the opportunity for the representatives to interact.

Kailash Malhotra, a retired professor from the Indian Statistical Institute, said that there is a need to document the substantial culture of the tribal peoples, such as the Paliyan, relating to subjects like bees and honey. Their traditions—they have nearly 100 songs about bees—are only transmitted orally.

Peter Gardner, a well-known anthropologist who has studied the Paliyan extensively, has written about the cultural values they place on gathering. Gardner wrote in 1972 that the Paliyan voluntarily form groups to gather honey in the forests. He pointed out that their economy, at least at that time, depended on bartering forest produce such as honey with their Tamil neighbors. They gained, in return, tools, pots, clothing, and ornaments.

When the Paliyan gather honey by descending mountainsides on ladders, he wrote—the wild bee hives are often in very inaccessible places—groups of men hold the ropes at the tops of the cliffs for the men dangling below. They believe that only in-laws of the men climbing down to gather honey should hold the ladders. The reason is that those men would never feel any rivalries with their brothers-in-law or sons-in-law—they would not have any sexual desires for their own sisters or daughters, and would never want to make them widows.

It was not clear from the numerous newspaper articles about Pollinator 1 if any of the sessions dealt with other anti-violence strategies associated with indigenous honey gathering in southern India. In any case, because of the obvious success of the festival, Sethi plans to continue his message about the importance of bees at a “Pollinator 2” festival, which he expects to organize in Hyderabad, the capital city of Andhra Pradesh, in October.