The President of Namibia attended the funeral last week for the !Kung San leader John Arnold, his wife, and his grandson, and he paid tribute to Mr. Arnold’s character and leadership. The three died as a result of a tragic highway accident in early July. Mr. Arnold, who was the Chief of the !Kung San, a closely-related group living just to the west of the Ju/’hoansi San and often lumped with them, died a week after his wife Maria !Nuse and grandson Duggery Arnold died. Those two were killed instantly when the vehicle he was driving rolled over on a rural highway. 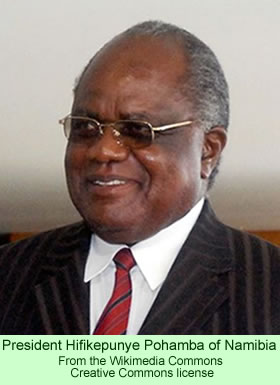 President Hifikepunye Pohamba of Namibia told hundreds of people attending the funeral service for Mr. Arnold and his family members that the death of the 54-year old chief was a shock to him. “Their tragic deaths represent a sad loss to the bereaved family, the !Kung Traditional Authority and to all those who knew them,” he said.

The President also said that he and his government will pay “special attention” to the needs of the San people in the area—the !Kung and the Ju/’hoansi. “We will continue to implement development programmes and projects aimed at empowering members of the San communities,” President Pohamba said.

Also among the dignitaries, former Deputy Prime Minister Dr. Libertina Amathila urged the government to improve the infrastructure in the Tsumkwe area, the districts in northern Namibia where the Ju/’hoansi and !Kung peoples live. Amathila was blunt in her speech, which President Pohamba listened to. She said the government should improve the lives of the San, and she pointed out the pain of seeing a house empty of people because the inhabitants had been killed on a bad gravel road that the government had not bothered to keep in good repair.

Ms. Amathila castigated the lack of telecommunications in those remote regions of the nation, particularly Omatako, where the funeral service was being held. “What do you expect in case of an emergency? I call on Government to do something about the telecommunication services issue in this area,” she said.

Eva Weitz, the regional coordinator of the Working Group of Indigenous Minorities in Southern Africa (WIMSA), said that Chief Arnold will be remembered fondly by the San peoples. His death is a “momentous loss,” she said. Ms. Weitz described him as a dedicated and kind person who was always generous with good advice that assisted the San communities.