A year ago, on September 18, 2011, a powerful earthquake devastated many communities in northern Sikkim. In a strange rehash of events this year, a minor tremor rattled the same Indian state on the same day, within about 15 minutes of the time of last year’s quake. It appeared to do no damage, though people in Gangtok, the state capital, rushed out of their houses in fear. Authorities quickly shut down electric power supplies. Many were jumpy about a repeat of last year’s tragedy. 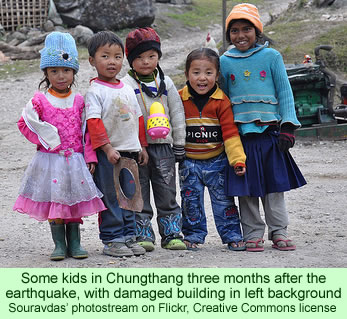 The powerful quake last year occurred near the border of Nepal, in the heart of Lepcha territory. It caused extensive damage and killed nearly 80 people, most of them Lepchas. Reporter Prianka Gupta visited Chungthang, a major Lepcha community in northern Sikkim, to see what effects remain from the quake last year. She writes that “Chungthang looks almost frozen in time.”

One year after, she observed people still living in heavily damaged buildings, and others trying to subsist in temporary shelters. Paden Lepcha told her that people had heard the government was going to help rebuild, but nothing has happened yet. Passangkit Lepcha told the reporter that if another earthquake struck, it might be better to die. There is nowhere else to go.

The schools in Chungthang have been affected. The Everest Academy is constantly threatened by boulders tumbling down the mountainside, and half of the pupils have left due to fear. Another school holds classes in an abandoned stable.

Landslides continue to destroy roads in the geologically unstable region, and prime tourist destinations are frequently inaccessible. The government of Sikkim blames the weather and the national government. The Chief Secretary, Karma Gyatso, indicates that the state has received only one-fifth of the funds promised by New Delhi. While the relief agencies provided help quickly last fall, long term rebuilding is proceeding very slowly.