The young Buid are giving up a key symbol of their identity, the bahag, or loincloth, an article of clothing that some of their elders see as an essential part of their traditional culture. Younger people increasingly see it as an artifact of the past. 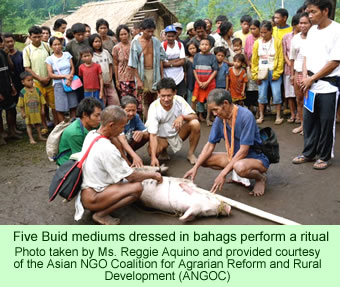 Some older Buid, such as the mediums performing a pig ritual in the accompanying 2010 photo, continue wearing the bahag whether or not others approve. It is their way of expressing their identity as indigenous persons wherever they go. Note that almost all of the Buid, young and old, surrounding the five mediums in the photo are wearing modern, Western clothing.

The bahag has long been a symbol of respect and an essential element in Buid rituals. The Buid, and the other Mangyan peoples living in the mountains of Mindoro Island in the Philippines, have been wearing loincloths as identity markers since before European colonization, according to a news report from the Philippines last week. The Wikipedia confirms that the bahag used to be worn throughout the Philippines, but its use is now confined to mountainous tribal peoples, such as the more traditional Mangyans.

The reporter quoted several young Buid, such as Wilbert Panganiban, who expressed embarrassment at wearing the loincloth—it exposes the wearer’s rear end. Laet, another Buid, didn’t like the fact that the loincloth was an identifying symbol marking a person as indigenous. The major issue appears to be that such identification exposes the Mangyans to discrimination.

Older members of the Buid communities have not taught their children the value of wearing loincloths, according to Helen Awang, a teacher. She makes an effort to teach the Buid children the importance of their traditional culture. She pointed out to the reporter that their culture suggests men should wear loincloths and women aprons at their weddings. The photo suggests that she is not getting very far.