How does the Semai community react to visitors, an interviewer asks the headman. His response, given in a new, 14 minute video, is that they are quite used to them. Pointing to a boy nearby, he adds that village children play around them and easily accept them. This was not always the case. 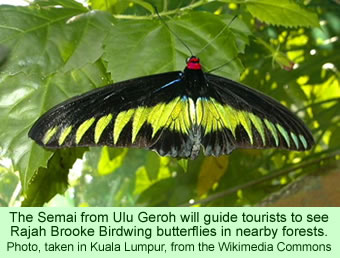 The headman, wearing a blue shirt with the word SEMAI displayed prominently, explains to the camera crew in Ulu Geroh that in other villages, kids are still scared of outsiders. There is even a legend, he adds, of strangers coming into villages and cutting off the heads of children. A woman on the film crew gasps loudly. “That’s why they feel scared,” he adds. He turns toward the little boy to smile, and the child grins back at him. “However, the children here like strangers very much.”

He doesn’t give the background of the legend, but it is based on very real historical circumstances. According to Endicott 1983, the Semai, along with the other aboriginal peoples (Orang Asli) of Peninsular Malaysia, were subject to violent slave raiding by the much more powerful Malay peoples throughout their recent history. While the slave raids have stopped, the Semai and the others are still sometimes subject to exploitative trading relationships, domination, and abusive treatments by the Malay and Chinese peoples living in the valleys.

The generally peaceful, accommodating nature of the Semai can be attributed, at least in part, to their responses to their history and their current social conditions. They have found it more effective, in the long run, to flee into the forests than to fight the far superior forces arrayed against them. Flight meant safety and survival; fighting meant death and enslavement.

Those conditions have had a significant impact on the Orang Asli. The Semai tell stories to their children about strangers coming to get them in the night—bogeys who will cut off the heads of children who misbehave. Used as a means of teaching obedience to the norms of their society, these stories are based on recent history and they still have an impact on youngsters in the more remote communities. Obviously in Ulu Geroh, kids have learned that to be scared of strangers may only deprive them of interesting diversions. They frequently smile and mug for the visitors’ cameras.

The new video provides a lot of insights into Ulu Geroh, the Semai village which has been in the news repeatedly over the past eight years, ever since it opened a tourism business. None of those news stories have offered as much as this new video, uploaded to YouTube on Wednesday last week.

In fact, the tourism promoted by the villagers is barely mentioned. Most of the previous news stories about Ulu Geroh have focused on the villagers taking tourists to see Raffelesia blossoms, the largest flowers in the world, or the rare Rajah Brooke Birdwing butterflies, a CITES protected species that is the national butterfly of Malaysia. Both the flowers and the butterflies may be seen in the forests near the village. The word “SEMAI” on the headman’s blue shirt is an acronym for the name of the local cooperative that runs the tourism business.

Throughout the new video, male and female narrators speak in English. The video provides English subtitles for the comments by the narrators, and it translates the conversations with villagers. The overall subtext of the production is to examine the ways the Semai are adapting to modernity, yet are keeping their traditional ways of life.

Describing a few scenes will give a sense of the whole. The headman is standing outside a building, with three or four quiet, well-dressed kids watching respectfully in the background. He says that in former times, the Semai lived scattered in the forests. While a rooster crows in the background, he adds that they all had to be gathered together and settled in one community because of the communist insurgency in Malaysia during the 1950s. Several questions and answers elucidate this history, and the rooster crows again.

The production mentions the advent of the tourism business in 2004, but it insists that the people continue to subsist primarily on domestic animals and raising local produce. Over scenes of hens and their chicks foraging through the grass, we are told that the villagers sell chickens to middlemen, who sell the meat in the town of Gopeng, which is located in the valley half an hour away.

After some discussion about factors that have an impact on the development of the village, the narrator asks if the Semai want their children to be educated. The literacy rate is below the rest of Malaysia. The video maker interviews some women who are sitting on a floor using a cutting board to chop vegetables, which are held in brim-full containers beside them. Do they want to have their children educated? Of course they do. “We want them to live a modern lifestyle,” one woman adds.

The video makes the point that, because there is a low crime rate in the village, children are free to wander about wherever they want. When nothing else is happening, it shows kids playing around the buildings, near or even in a small river, and just standing about, quietly watching the visitors doing the filming. They wander in and out of most of the scenes.

This new video, published by Kean Yap, a Malaysian, and titled “Semai Community,” provides very little additional information about itself. The opening gives only the title, and the closing credits list some names but no further information about the people who have given us these interesting views of contemporary conditions in a Semai village.

It seems as if Ulu Geroh is firmly committed to keeping its way of life next to the forest. While the Semai of that village are no longer dependent on a nomadic, foraging lifestyle, they clearly still want to wander in the woods. They love to hunt and gather as much as they can, and they enjoy living in the outdoors. The video portrays them not so much to be struggling with modernity, as to be intent on preserving the best aspects of their peaceful lifestyle.