An Indian news story last Thursday included a paean of praise for the equality that exists between Ladakhi women and men, a situation that is unique in a country where female abortion and infanticide are still widely practiced. 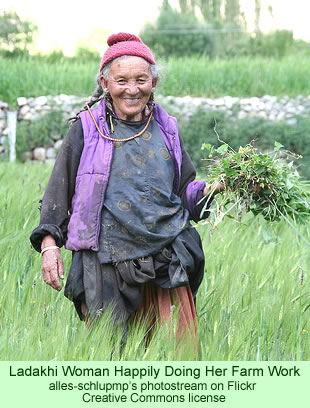 The reporter was clearly impressed upon arriving in Leh, the largest community in Ladakh. “When you first step into this high altitude region, you will be greeted by the wide and candid smiles of the Ladakhi women.” The article develops this theme — of women who contrast with the rest of the subcontinent. Women don’t peep shyly out from shuttered windows, they don’t wear veils. They work out in the fields, full of self respect and confidence, secure in their positions in their communities.

The women’s strength, according to this analysis, is based on their commanding positions in the traditional households, which were, and still are, the center of the Ladakhi economy. This factor fosters their respect in their communities.

Anthropologist R. S. Mann would have concurred with this description of the relative importance of Ladakhi women in their society, but for different reasons. Mann (1986) described the fact that there was no seclusion of Ladakhi women; they interacted equally with men in social situations. He felt that the former institution of polyandry was probably the major factor in helping develop the women’s equality.

Although polyandry is no longer legal anywhere in India, in the traditional polyandrous Ladakhi family, the woman managed the economy of the home. That gave her authority and respect. Furthermore, Mann points out, the Buddhism practiced in Ladakh does not in any way demean the status of women, although certain religious roles are reserved for men only. For instance, widows are discriminated against in some Ladakhi religious functions.

In some ways, Mann argues, women did not have full equality with men. They did not, traditionally, travel as men did. While men recognized that the women frequently worked harder than they did, nonetheless they often treated women as inferior. But the women did have equal rights to divorce, the same as men did, and when they did divorce, they were compensated fairly.

Some of Mann’s descriptions of conditions 30 years ago were confirmed by the analysis last week. For instance, except for the plowing that the men do exclusively, Mann wrote that the women share the field work with the men, help out with harvesting and threshing, cooperate in construction jobs, and carry heavy loads. Women do the cooking and cleaning without the assistance of men. The news report last week more or less confirmed that these conditions still prevail.

But the essence of Mann’s argument was that the practice of polyandry, especially of women marrying groups of brothers, gave a lot of power to the wives in such unions. While the oldest brother had more rights than the younger ones, the woman normally spent equal time with each man. The anthropologist asserted that there was no jealousy among the brothers, and the woman often had an authoritarian relationship with the younger men.

The reasons for the polyandry included limiting the growth of population; allowing some men to stay and care for households while others went up into higher pastures with family flocks; sharing scare resources; achieving order in family units; and, not insignificantly, ensuring the freedom of the women. In sum, the polyandry was a major contributing factor in developing the feelings of confidence and strength among the women, which obviously has persisted long after the polyandrous marriages have ended.

Last week’s news story focused on Self Help Groups, which actively promote the interests of women in the more remote Ladakhi villages. These SHGs, as the reporter called them, help protect the traditional culture, especially the strength and positions of the women.

Women in the villages, especially housewives, complete their daily chores and then join the village SHGs, where they spin wool, dye it in the traditional manners, and knit woolen garments for sale. They still help with heavy tasks in the fields. They earn income from the sale of products such as apricot jam and seabuckthorn juice. In their SHGs, the women make decorative items and winter clothing for sale in Leh.

The reporter interviewed the president of the SHG in the village of Chashut, called the Shashi Self Help Group, started by six women in the community. It has grown to 15 active members now who work to improve the village as well as their own lives.

Amina Khatoon, the president of the group, told the reporter, “after working for five years in this village, we have achieved a lot of improvement not only in our work but in the lifestyle of the villagers.” She described the efforts of the organization to spread awareness of appropriate health and sanitation practices.

In 1991, the women’s Self Help Groups formed an alliance, called the Women’s Alliance of Ladakh, known locally as Ama-Tsogspa. These groups foster input from elderly women, who participate in income-generating projects such as spinning and weaving, thereby sharing their traditional knowledge with the younger people.

The SHGs are having some difficulties recently because of the remoteness of the villages, which makes it difficult for the people to gain access to raw materials. The women are constantly in search of alternative sources of supplies for their craft work.

But despite the hassles of keeping up with altered economic conditions, the SHGs continue to help the women. They foster the continuing strength and confidence of the women, yet also help them negotiate the social and economic changes that are occurring in the region.