The news report from Tsumkwe last week was stark. Two men, one 25 and the other 29, argued over a woman, both claiming her. Both were under the influence of alcohol. The younger man pulled out a poisoned arrow, fit it to the bow he was carrying, and shot the older man directly in the stomach. He died almost immediately. The dead man was named Jacobs Johannes. The killer was not identified. Police have notified the relatives of the deceased. 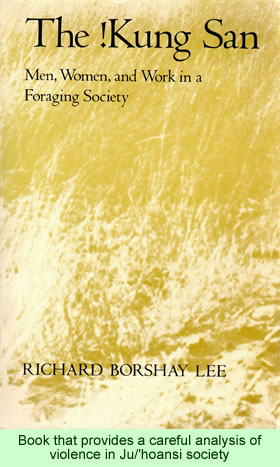 The report given to the press by a Namibian police official might seem routine—jealous man kills rival over a woman—except that it raises questions as to how really peaceful are, or were, the Ju/’hoansi. For while the ethnicity of the killer and the victim are not mentioned, most of the residents of Tsumkwe, in northeastern Namibia, are, in fact, from that society. Violence, especially once alcohol became easily available, has been one of the tragedies to afflict them.

Fighting with poisoned arrows is not new to the Ju/’hoansi. Highly regarded scholars have disagreed about how much violence they exhibited, even decades ago before they settled into more or less permanent communities. The brief news report last week revives those older, but still important, discussions. For it is worth an attempt to figure out just how strongly Ju/’hoansi values proscribed violence.

According to Richard B. Lee, one of the brilliant young scholars who did his first field work in the borderlands between Namibia and Botswana in the 1960s, the Ju/’hoansi, then called the !Kung, had a fairly violent society. Lee’s masterful book The !Kung San: Men, Women and Work in a Foraging Society (1979) cited statistics of many recorded killings among the people, but he observed that when fighting did break out, it was normally up to relatives of the combatants to stop it. In all of the fights witnessed by Lee and his colleagues, women and elders usually intervened in time to prevent men in their prime from going for their bows and deadly poison arrows.

The homicides that occurred in the past, according to data the author gathered, were mostly a result of such spontaneous fights, the flashes of anger. Only five were premeditated murders, and only a few resulted from special expeditions to execute people. Lee’s chapter 13, “Conflict and Violence,” p.370-400, carefully analyzes the existence of violence within a fascinating, if not always peaceful, society.

Lorna Marshall, a scholar who did field work among the Ju/’hoansi for a number of years beginning in the 1950s, described in her careful book The !Kung of Nyae Nyae (1976) the process by which Ju/’hoansi hunters made their arrows and applied poison to them. They dug up from deep underground the larvae, in their cocoon stages, from three different species of beetles. They found these larvae under trees infested with the adult insects, and kept them dry in covered horns for future use.

When they were ready to apply the poison, the hunters used an amber-colored fluid that comes out of the larvae and spread it very carefully on the shanks of the arrows. But they did not put it on the tips—that would have been too dangerous. There is no known antidote for the poison, and even a small scratch from an arrow point could well be fatal.

Marshall (1976) presents a different picture of Ju/’hoansi peacefulness from that of Lee. She indicates that quarrels did of course occur, but none of the people that she spoke with had any memories of wars or other types of violence between different bands. Furthermore, their parents and grandparents before them had had no knowledge of such things.

Later in the book, she acknowledges that there had been instances of the Ju/’hoansi using their deadly poisoned arrows in anger. “Men have killed each other with them in quarrels—though rarely—and the !Kung fear fighting with a conscious and active fear,” she writes (p.288). Marshall provides numerous instances, in her book and in her other writings, of the Ju/’hoansi successfully intervening in the tensions and conflicts of others, particularly when they threaten to blow up into real fights. The consequences of fighting with their ultimate weapons were too serious, she observes repeatedly.

The news story last week has, as yet, not had a follow up, so we don’t know what has happened to the man who committed the crime. We do know that the weapon of choice was the poison arrow. Presumably, Ju/’hoansi hunters still have to find beetle grubs under infested trees in the bush and process them for their hunting purposes, since administrators only allow traditional hunting tools—bows and arrows—to be used on the Nyae Nyae Conservancy lands.

One of the points that comes very clear in the anthropological literature about Ju/’hoansi fights was the importance of the closely knit bands in settling their disputes. People sensed when tensions were rising, when two adult men were starting to get very angry. Someone might become angered enough to run for his poison arrows. One should grab and hold the two antagonists, if necessary, until tempers could cool, until reason could prevail.

While the circumstances of the recent killing are not completely clear from the brief news story, there is no mention of a crowd of family members intervening, of nearby people trying to stop the two antagonists from their fight. The one man simply grabbed his poison arrow and shot the other in the stomach.

The tragedy is thus in the circumstances: of people who have not adjusted their lives, their culture, and their society to modernity. They have not yet made accommodations to alcohol, which was mostly unknown to them 60 years ago. They also do not have close kin and neighbors right at hand to restrain them when they do get angry, as the news story indicates. These kinds of fights no longer occur around a campfire in the bush, with many concerned people nearby. When people don’t adjust the basis of their peacefulness to social changes, the results can certainly be tragic.