Early last week, a rebel group known as M23 invaded Goma, a city of one million people in the eastern D.R. Congo, capturing it as the national army did nothing but melt away. The well-armed UN forces in the metropolitan area watched the invaders advance since their mandate did not give them the responsibility of confronting the Rwandan-backed rebels. 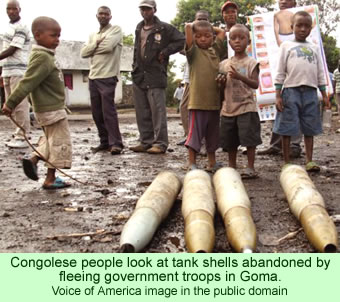 M23, created only seven months ago in April 2012, demanded direct talks with the government of the Congo. Officials in the capitol responded that they would only negotiate with the government of Rwanda, which most observers believe is the backer of M23, an observation that the rebels themselves deny. With the national government maintaining its prerogatives, its armed forces on the ground abandoned their weapons and fled.

By Tuesday, the rebels secured complete control of the city, the capital of Congo’s North Kivu province, and were advancing south on Bukavu, the capital of South Kivu province. The rebel leaders have indicated that they soon plan to move across the country and seize the national capitol, Kinshasa, in western Congo.

Negotiations between the presidents of Uganda, Rwanda, and Congo last week called for the M23 to cease its occupation of Goma, to stop fighting, and to pull back. No one, however, has provided the force to actually stop the operations of the rebel army.

The real danger in the situation has been the disruption of the lives of all the refugees, people like the thousands of Mbuti who already live in the refugee camps scattered around the outskirts of the city. At the beginning of last week, at least 60,000 people, Mbuti and non-Mbuti alike, fled the Kanyaruchinya Camp as the M23 army advanced.

The Kanyaruchinya Camp was completely deserted. Other refugee camps, such as the Mugungu Camp, already overcrowded, had to accept thousands of new refugees despite their own very difficult situations: a lack of safe water, minimal access to food, and the threat of cholera outbreaks.

Humanitarian agencies trying to cope with the situation were forced by the crisis to suspend their operations in the area, despite the fact that tens of thousands of people are totally dependent on them. The UN estimates that over 1.6 million people in the eastern area of the DR Congo have been forced to leave their homes due to the warfare.

By Thursday last week, UNICEF officials estimated that about 100,000 people had left their homes, or refugee camps, because of the fighting. Over half of the new refugees were reportedly children. A spokesperson for UNICEF said that a cholera outbreak was the most serious threat to the refugees. It had already been reported in the Kanyaruchinya camp, and access to safe drinking water throughout the region is difficult at best.

A report on Friday indicated that the Mungugu camp just west of Goma, or Mugunga III as the news story called it, was still functioning. It was already a difficult place to live for the Mbuti refugees, according to a news story in June 2011, so presumably the new waves of refugees have made the situation even harder.

Kouassi Lazare Etien, head of the UN High Commission for Refugees office in Goma, was able to visit Mugungu Camp on Thursday. He reported that about 40,000 people still lived there, though they had not had any food for three or four days. Large numbers of assaults, rapes, and attacks on children appear to have accompanied the movements of the rebel army around the Congo countryside.

As of yesterday afternoon, the news from Goma was confusing at best, depending on which sources of information the news media were relying on. Some reports indicated that the rebels were definitely planning to withdraw from the city. Other reports said that they had no intention of withdrawing. Still others reported they had already started pulling out. The reports do agree that the estimated numbers of people displaced by the latest round of warfare is up to about 140,000.