The Inuit Circumpolar Council and the Saami Council, major organizations for both societies, have developed an effective working relationship, a testimony to long traditions of cooperation. A journal article by Shayna Plaut published in 2012 explores the relations between the two groups. 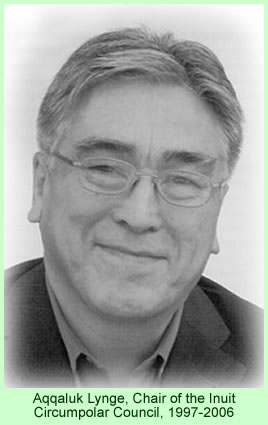 The theme of the article is the importance of cooperation. The author quotes Aqqaluk Lynge, former president of the ICC, who believes that the close relationship is unique and positive. “You don’t find that close cooperation internationally [among other organizations] but the Inuit and the Saami do have it,” he said (p.204). “This can serve as a model for other Indigenous peoples.” He also emphasizes the importance of personal connections, trust, and mutual support.

The Saami, reindeer herders, fishers, and farmers, number about 70,000 people in northern Norway, Sweden, Finland, and northwestern Russia. More than twice as many Inuit, traditionally a hunting and fishing society, live in Greenland, Canada, Alaska, and northeastern Russia. People in both societies are proud of their differing spiritual worldviews. Both groups also proudly retain their distinctive child rearing methods, health practices, and clothing styles.

While most of the Inuit and Saami live in states that, today at least, generally respect the organizing patterns of their minority, indigenous peoples, these conditions did not always prevail. Both groups were subject, historically, to attempts by some of their host states to annihilate their cultures. In several cases, state governments tried to eliminate the uses of the indigenous languages by educating children in boarding schools outside the traditional territories of their parents.

While there are some similarities in their histories, the Saami and the Inuit have fundamentally different cultures and traditions. But the representatives of the two peoples saw that they faced enough similar issues to warrant closer cooperation.

The ICC and the Saami Council began forging links at a conference in 1973 and strengthened them at another meeting in 1975. Throughout the 1980s and 1990s, the ties became still stronger. The two groups worked together on the Declaration of the Rights of Indigenous Peoples, learned to share their traditional knowledge, and, just as importantly, shared their experts and their lawyers.

They have both learned, over the years, that one of the challenges they have in common is a need to overcome their histories of being the subjects of repressive colonialism. They have learned that the strategies they pursue in interacting with their host countries are similar. As a result, the two organizations learn from one another and share their approaches to their respective issues. This mutual support, according to the author, is emblematic of the basic habits of cooperation endemic in both societies.

The author argues that the harsh northern climate in which they both live fosters patterns of cooperation with outsiders as an adaptive mechanism for survival. To extend that argument, she writes that forming international councils to represent and promote shared interests is a natural outgrowth of that mechanism. The cooperation between the two umbrella organizations represents a still larger stage of international cooperation, one that grows out of the respective traditions and histories of the Inuit and the Saami.

Duane Smith, the Director of the ICC-Canada, stated simply that cooperation is an obvious necessity. “We work together because it is to both of our benefit. Why wouldn’t we cooperate if it helps us both (p.199-200)?”

Both organizations firmly believe that people must first commit themselves to their own cultures. Only after cherishing their own ways can the Inuit and the Saami consider having links with people in the other region. “You cannot contribute to the global society unless you have a firm solid basis in who you are,” says one Saami leader (p.200).” Northern identity is thus built on diversity—and pride in it.

Both the Saami and the Inuit recognize that they have traditionally solved their conflicts through effectively avoiding and resolving disputes. This pattern has fostered a style of politics, similar in both societies, of attempting to solve issues through open, parliamentary style negotiations and effective diplomacy. In essence, modern political practices among the Inuit and the Saami represent contemporary ways of building on their traditional styles of getting along.

A unique expression of the cooperative spirit between the two organizations was the creation of the Arctic Council, an intergovernmental organization that both groups helped organize. One of their major goals in helping found the Arctic Council was to make sure that they would remain substantial partners—strong contributors to the decision making process.

They wanted to ensure that the Arctic Council would work on a consensus basis rather than a contentious one—an approach that fits in with their own traditions. Although the two groups do not vote in the Arctic Council, they do have the power to block votes. Thus, the Arctic Council has become a collaborative group operating through consensus, with the two indigenous organizations having much larger positions than simply ceremonial ones.

Ms. Plaut devotes a portion of her article to Saami-Inuit cooperation that has developed outside the purview of the two major organizations. One area for cooperative efforts has been educational exchanges. The University of the Arctic, a non-degree granting institution that functions without a physical campus, helps promote plurality, cultural diversity, and an Arctic identity. It is a non-traditional institution that fosters collaboration and cooperation. In effect, the University pulls together more than 120 member institutions in the Arctic region.

The author describes other cooperative exchanges and cultural programs that help the Saami and the Inuit develop people-to-people interactions based on the commonalities of life in the North. Her article highlights the continuing importance of the cooperative peacefulness that characterizes both the Inuit and the Saami, despite their many differences.

Plaut, Shayna. 2012. “’Cooperation Is the Story’—Best Practices of Transnational Indigenous Activism in the North.” The International Journal of Human Rights 16(1): 193-215