Richard B. Lee, one of the foremost scholars of Ju/’hoansi studies, published a brief autobiographical account last spring that included some interesting tidbits about the Ju/’hoansi. Best of all, his description of his research work in the Kalahari, his professional achievements, his publications, and his interactions with the Ju/’hoansi themselves was fun to read—a treat to savor during the holiday season. 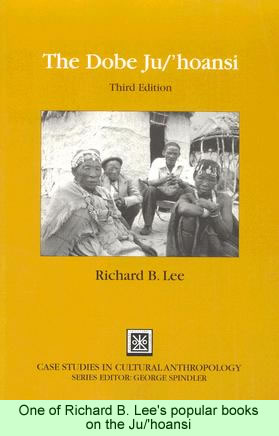 In a serious vein, he tells us that he was born into a Russian-American Jewish family that moved to Toronto when he was four. He writes, with a light touch, that his own Jewish background prepared him quite well for the Ju/’hoansi style of socializing—their preoccupation with food, the frequency of their quarreling, and, especially, the importance of humor to them when confronted with adversity.

A strong sense of humor, evidently, is a key survival skill for them as they face the difficult conditions of the Kalahari Desert. Lee doesn’t say if his endurance of fieldwork conditions in the desert has been aided by his own sense of humor, though one can suspect, from the way he writes, that he does not take himself too seriously.

Another formative influence on Lee as a youngster was that he was shipped off to a summer camp at eight years old and learned to appreciate camping out and living in the wilderness. He had assumed, while doing his undergraduate work at Toronto, that he’d be focusing his interests as an anthropologist on Northern Canada. However, when he went to Berkeley for his PhD, he worked under an Africanist who urged him to consider a project among the San societies of the Kalahari.

Lee describes his various research and publication projects and his important books, but the special charm of his article is his focus on the Ju/’hoansi people, individuals with whom he has had cherished relationships. He met, during his first trip to the Kalahari in 1963, a young woman named Bau who, with her husband #Gau, already had a growing family. He also met her father-in-law, #Toma //gwe. His name, translated, meant “Toma Sour Plum,” and Lee feels he was well named. He was likeable, but grouchy.

Lee was surprised when old Sour Plum took him aside that first day they met and began demanding lots of gifts. He made it clear that if the scholar had stuff to give away, he should give it to them, not to other people in the area. This demanding spirit surprised the young anthropologist. What was going on? Lee was to discover that the Ju/’hoansi had a sharp-edged wit, and that what at first appeared to be selfishness was actually a widespread type of socializing that anthropologists labeled as “demand sharing.”

Lee recounts the intricacies of the field work he engaged in. He first had to learn the Ju/’hoansi language—which he worked on after he had learned SeTswana, the tongue of one of the dominant peoples in the Kalahari region. Then, he sought to acquire a basic understanding of the traditional knowledge of the people. He worked on this by learning everything he could about the animals and plants and their desert environment.

His next tasks were to learn the names of everyone living in the region—466 people by the time he left the area in 1965. He then compiled genealogies of everyone, to see how people were related to one another. Then, he set out to observe and learn about the healing medicinal dances held frequently by the Ju/’hoansi.

After several decades of research and publishing, he switched his interests in the 1990s to medical anthropology and began an investigation of AIDs infection rates among the Ju/’hoansi. He found that they are far less infected by the disease than other people in Namibia and Botswana, a result, he feels, that is due in large part to the traditional independence and autonomy of the women.

In July 2010 he decided to see if he could find one of his earliest friends, the woman named Bau whom he had first met 47 years earlier. He had not seen her for 20 years, and there was no way to contact her in advance. He and a research colleague, Megan Biesele, drove across the border from Namibia into Botswana to see if they could locate the lady, now in her 70s.

As soon as they drove into the village, cries rang out—Lee was instantly recognized, and Bau came immediately. After lots of hugs and kisses, they all sat down to catch up on the news. Bau was surrounded by her seven living children, 28 grandchildren, and numerous other more distant relations in the village.

The people thrived on three separate sources of sustenance. They continued to rely on their traditional food gathering, they held odd jobs from the road department, and they received assistance from a mission station nearby. Lee quickly determined that other villages in the area had a similar sense of stability. He concludes that Bau’s stable, happy family situation is not unique, and that the Ju/’hoansi are doing OK. AIDs is not ravishing their communities, as it is many other parts of southern Africa.

Noticing how well the people seemed to be doing, and the presence of services such as cell phone access, stores, schools, and wage labor, he asked a man named /Twi!gum how they managed to cook their food before the advent of iron pots, which were introduced by outsiders decades earlier. The man deadpanned his reply. “Well, everyone knows that you cannot survive without iron cooking pots, so we must have died!”

In his own droll manner, /Twi let the senior anthropologist know right off that somehow they had managed to survive before the anthropologists came along. Get over it.