Birding has become a passion for many Amish people in Ohio, and not just the ones in Holmes County who are well-known (among birders) for their skills in the annual Christmas Bird Count. An article by Suzanne Fisher published early last week provided some new perspectives on their avocation. 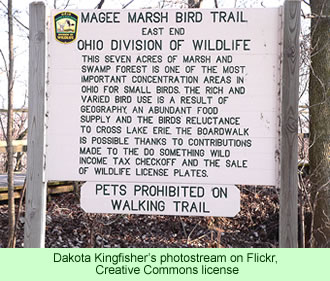 Many Amish families hire vans and drivers to take large groups north to the shore of Lake Erie in the spring and fall to visit places like Magee Marsh, near the western end of the lake, where birds congregate in large numbers during their migrations before resuming their flights north or south. Bird watchers congregate with them.

The author quotes the observations of environmentalist Cheryl Harner, author of the nature blog Weedpicker’s Journal, about the large numbers of Amish groups, with many children in tow, who gather at these birding hot spots each migration season. The children are invariably quiet and orderly—they never shout or run. It’s almost as if the adults are raising their kids to be birders. She surmises that the Amish seem to have a strong respect and reverence for nature.

Ms. Harner, herself a serious birder, often visits Amish farms to check out the birds, which appear to be more numerous than on “English” farms. The reason, she feels, is the Amish use little if any pesticides, at least compared to other farmers. Without the insecticides, their fields of course have more insects, which attract more birds. She argues that while kestrels may be declining elsewhere, their numbers are increasing in the vicinity of the Amish farms.

Ms. Fisher quotes from a 2007 American Birds article by Bruce Glick on the Holmes County Christmas Bird Count, and updates his information about Amish participation in that quintessential bird-listing experience. Cheryl Harner adds that the CBC is only a male thing among the Amish. Families, including women and girls, will participate in group birding, with many children included, but the women and girls would never go birding by themselves, as the men and boys do during the CBC.

The Amish style of birding also differs from that of the “English” birders. Their teenage boys prefer to bird from their bicycles. In fact, they are committed to that style of birding. They will decline offers to drive around the countryside with other people in vehicles. They only bird from bikes. Ms. Harner repeats her admiration for the way the Amish teach their children to be quiet. They are becoming ideal little birders, even while they play.