The consumption of alcohol poses a severe threat to the peace and stability of Ladakh, according to speakers at a one-day program held in the Ladakhi capital, Leh, last week. The Leh city police department organized the program, titled “Negative Impact of Alcohol on Society,” to alert the people of the district about the dangers of alcoholism. 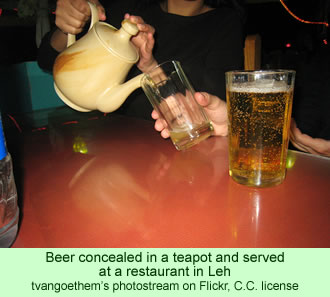 A range of community representatives listened to several presentations. P. Sonam, the Additional Superintendent of Police, Leh, welcomed participants by explaining that the point of the meeting was to raise awareness throughout Ladakh of the menace that alcoholism can play in a small, closed society such as theirs. He blamed alcohol as the primary cause of most recent crimes and accidents in Ladakh. The people need to stem the problem before it blights their future, he urged.

Dr. Tsering Lhadol pointed out that alcohol is the main source of problems that harm Ladakhi society, such as the introduction and spread of HIV/AIDS. She urged Ladakhis to make decisive efforts to end the over-consumption and abuse of alcohol.

A Councilor, Tsering Angmo, said that Ladakhis have already witnessed many unpleasant, alcohol-related incidents, which particularly threaten the younger generation. She said that doctors and the police can’t really stop the spread of alcoholism. The whole society must take responsibility for rooting out the problem.

The Deputy Superintendent of Police, Abdul Khaliq, described how the police department has been working to control the illegal trade in alcohol. He said his department could take credit both for lessening the illegal commercial activity, and for reducing alcohol-caused highway accidents.

Twewang Dorjey, the Police Inspector, indicated that between 70 and 80 percent of vehicle accidents in Leh District were caused by alcohol, which has resulted in 30 to 40 fatalities annually, not counting the much larger numbers of injuries. He urged the public representatives present at the meeting to take their own initiatives to curb alcohol consumption, especially at the village level throughout Ladakh. That might help preserve a healthy future for the Ladakhi people. The news report did not indicate if any of the speakers dealt with threats that alcohol may pose to the traditional Ladakhi peacefulness.

Ladakh is not the only peaceful society to recognize the dangers of alcohol. The Paliyans and the Ifaluk Islanders are others who have a strong fear that any use of alcohol could prompt violence. But Inspector Dorjey’s comment that alcohol use at the village level is a paramount issue for Ladakhis is useful, since, except for the small city of Leh, most Ladakhis live in high mountain villages. The literature about those communities is a good place to look for further details about the nature of Ladakhi alcohol consumption—and its relationship to their peacefulness.

Janet Rizvi, in her overview of Ladakh society (1994), points out that the alcoholic beverage of choice in Ladakh, and throughout the greater Tibetan region, is chang, a mildly alcoholic beer made out of barley water. It is consumed along with butter tea as a major ingredient of the Ladakhi diet.

During the long winter evenings, men and women both participate in family events and celebrations, and the adults will consume quantities of chang in the process. In contrast, Rizvi writes, in Kargil and the other Muslim sections of Ladakh, the people consume much less, if any, chang due to their strict religious prohibitions against alcohol. The Buddhists of the Leh District are not so constrained.

Dr. Keith Ball, a medical expert visiting Buddhist Ladakhi families in the Zangskar Valley in 1980, observed the wide consumption of chang. He noted that the beverage is provided to very young children, even those that were still nursing, but an informant assured him that alcoholism was unknown. However, he wrote, “We noticed that the people became very merry as the chang parties progressed (p.409).”

The best source for the contemporary uses of chang in Ladakhi villages is the recent book by Fernanda Pirie, Peace and Conflict in Ladakh (2007). During her field work in a remote village, Pirie found that chang continued to be consumed constantly during all social occasions. This was especially true during the winter when temperatures routinely go below -30 degrees C and people normally stay indoors.

The critical issue is the affect the consumption of chang may have on the stability and the resolution of conflicts in the village. Villagers criticized such anti-social behaviors as displays of anger, selfishness, laziness—and the over consumption of chang. They stigmatized all those behaviors as being morally wrong. But they were not so much opposed to the drinking of the alcoholic beverage itself, as to the tendency of people—particularly men—to drink in excess and then to cause alcohol-induced aggressive incidents.

People would regularly brew the chang, offer it to others, and consume it in large quantities. If a man (rarely a woman) would return home from a social occasion drunk, he would fall asleep in front of the stove and the others in the house would laugh indulgently. As one informant told Pirie, “most of us just fall asleep, but chang makes some men feel tall and then they start arguing (p.72).” The people feared the social disruptions of arguments, and possible fighting, that the alcohol might cause.

Pirie emphasizes that the Ladakhi village people she worked with did not have a rosy view of their own peacefulness. When she commented to one man that the villagers did not seem to quarrel very much, he quickly contradicted her. The village people have far too many arguments, he assured her, which is a very serious situation. Besides, he added, “we drink too much chang (p.126).”

Reading between the lines of the news report from Ladakh last week, it is clear that the Leh police are trying to build upon well-established concerns in the society about the harm that alcohol can do for social peace and stability when it is consumed to excess.