A news report in the Times of India last week connected Paliyan plant knowledge, ancient Tamil poetry, and the work of modern natural scientists. A Tamil poem is the focus of the story. 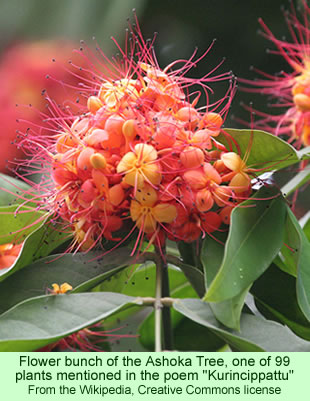 During the so-called Sangam period of history in South India, from approximately 100 BCE to 100 CE, a court poet named Kabilar, also spelled Kapilar, wrote a lengthy poem called the “Kurincippattu” or “Kurinjipaatu.” A Wikipedia article provides an overview of it.

The 261 line work describes the mountainous terrain of Tamil Nadu where a hero and heroine have fallen in love. They enjoy frequent trysts, but they are afraid to tell their parents of their relationship. When they cannot arrange to meet, however, the girl misses her boyfriend so desperately that she falls ill and starts to waste away. Her parents are mystified about her illness until a girlfriend tells them the truth, but she relates their story in such a way that they approve of the match.

In the course of the story, the poet refers to 99 different plants growing in the mountains of Tamil Nadu, including, for instance, one referred to as the pinti (Saraca indica L.), now called the Ashoka tree (Saraca asoca). An endangered forest tree that originated in the Western Ghats, it is widely revered in India and Sri Lanka for its many historical and mythological associations, as well as for the beauty of its colorful orange blossoms.

The 99 flowers of the Kurincippattu have fascinated a contemporary zoologist who has had a life-long passion for Tamil literature and culture, and especially for works of the Sangam period. C. Ravi, a 36-year old assistant professor of zoology at Thiagarajar College in the city of Madurai, recently combined his two interests into an interdisciplinary search for the 99 plants mentioned in the famous poem.

He enlisted the help of a student, T. Boopalan, and a botanist, Prof. S. Ganesan, and the three combed the Sathuragiri Hills and the Megamalai Hills for the flowers. Of the famed 99 flowers, they found 46—18 in Sathuragiri and 28 in Megamalai. He presented the results of their search on Tuesday last week at a national conference titled “Biodiversity—Green Strategies for Sustainable Development” held in Chennai. Unfortunately, the Times of India article did not mention the names of any of the plants they had found.

While the locations of these plants in the hills of Tamil Nadu may have been a mystery to science, the Paliyans clearly knew about them already. Prof. Ravi said that the local tribal peoples, notably the Paliyans, have been using the flowers and other parts of the plants for their herbal and medicinal values for many years. Prof. Ganesan added, “the tribals of Sathuragiri and Megamalai are good herbalists and know the ethno-botanical importance of many plants. They don’t go to doctors, but nurture the plants and use them extensively in their food and for medicines.”

The scholars feel that more of the plants mentioned in the ancient poem could also be found, though probably in more isolated, more remote areas of the mountain ranges. It was not clear from the article how much they discussed the plant locations with the Paliyan people.

Another attendee at the conference, Sheela Rani Chunkuth, spoke up to urge the preservation of the traditional knowledge of the Paliyans and the other tribal societies. She said, “in a generation or two much of this knowledge will be lost. It is up to this generation to learn about traditional medicine.”