Lye Tuck Po, a prominent Malaysian anthropologist, has visited her Batek friends in the Taman Negara National Park, and once again she has posted some wonderful photos of them. As she has had time over the past several weeks, Dr. Lye has been adding images to her blog, and to her Flickr site. She has generously given us permission to reproduce a few of them, which hopefully will entice visitors to Peaceful Societies to check out her work. 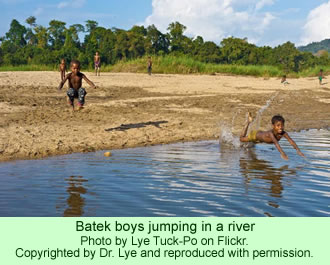 One particularly fetching photo is of a couple boys that she admits she set up by challenging them to jump into a river. Titled “On Batek rivers | 2″ and dated January 31, the caption to the photo indicates it was taken where the Yong River merges with the Tembeling, below Kuala Yong, in Taman Negara National Park. It appears as if she didn’t mind wading out into the water to get her shot.

In a group of pictures posted on January 21, she includes an image of one of her Batek friends, a man named Muncup, and next to it a photo of his great grandson. Below that she posts an image of him taken in a 1996 group shot.

Below those images, she includes a charming photo of a young mother carrying two children, a baby of about four to six months in a sling on her left hip, and an older boy, between two and three, clinging on her right. Dr. Lye indicates how much he looks like an older uncle, whose picture she took in 1999 when he was two years old, and a grandfather, whom she photographed in 1996. The toddler could well be playing like any other normal kid, but he chose to have a moment of comfort from his mom. 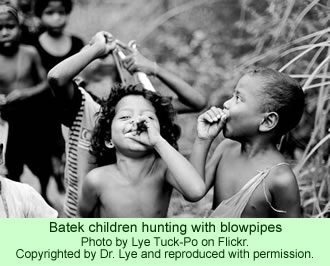 Another charming photo from her 2013 visit shows several children holding their hands up to their mouths pretending as if they are hunting with their blowpipes. She writes that the children were making V signs with their fingers, a trick that she feels they learned from local Malay villagers or tourists. Adult Batek never make those signs. So she protested, telling them they should play at being Batek hunters and pose as if they were in the forest with their blowpipes.

Dr. Lye also gave them elastic bands so they could make catapults and try their skills at hunting squirrels or birds. She also gave them toy blowpipes for encouragement. The kids were not able to shoot any game that day, however.

She also has posted, from her 2013 trip, some images of general scenes in the area. She took a couple good pictures on the water of the Tembeling River, the southeast border of the national park and the edge of Batek territory. One photo shows three men in a boat, one of whom is talking on his cell phone, the second is stretched out smoking, and the third is simply sitting there in a relaxed manner looking out across the water. 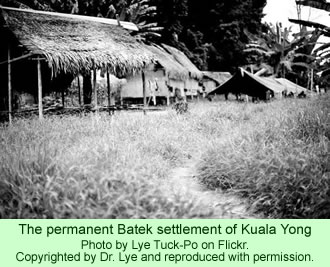 She included a shot taken in Kuala Yong, the permanent Batek settlement in the Taman Negara National Park where she stayed during her visit. She wrote in her 2004 book Changing Pathways: Forest Degradation and the Batek of Pahang, Malaysia, that Kuala Yong was established by the Batek when they were forced to leave their original settlement area, located about ten minutes away by boat.

Readers who are acquainted with Dr. Lye’s book may remember her moving discussion of a speech by an informant named Tebu, who told her about the importance of the forests to the Batek. The fate of the forests is linked to the fate of the world, in his view. The anthropologist talked with him at length in that community, Kuala Yong, a place that has evidently been important to her for several decades.