The disputes after a 2009 invasion of the Ju/’hoansi Nyae Nyae Conservancy by 32 neighboring Herero farmers may have finally been resolved in a Namibian court. Judge Nate Ndauendapo has ordered the national government to pay the 32 farmers from the Gam area, to the south of the Conservancy, damages amounting to N$3.2 million (US$360,000). 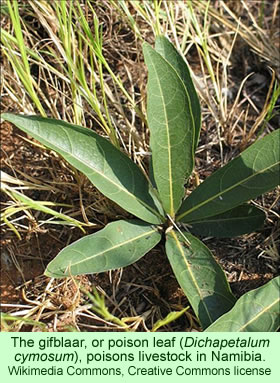 The payment is for the 995 cattle the government had seized and destroyed. The judge also ordered the government agencies involved in the seizure to pay the farmers an additional 20 percent interest, calculated from July 17, 2010, until the principle amount has been fully paid.

The farmers explained in court that they had been forced to cut the fences and illegally enter the conservancy lands owned by the Ju/’hoansi in 2009 because their cattle were being poisoned by a wild plant, named gifblaar, the Afrikaans term, and sometimes known in English as poison leaf (Dichapetalum cymosum). The Herero farmers claimed that by confiscating their cattle, the government had left them permanently destitute. The judge evidently agreed.

Judge Ndauendapo had earlier required the 32 farmers to testify, one by one, as to the exact numbers of cattle that the government had confiscated after the invasion. The government had feared that the cattle might have contracted foot and mouth disease from wild ungulates after the Herero farmers had herded them into the Conservancy lands, hence the quarantine.

The livestock had been initially held at the police station in Tsumkwe, the major Ju/’hoansi town in the Nyae Nyae Conservancy. They were then moved outside Tsumkwe to Apel Pos, then into a quarantine facility. The farmers claimed that the government had no right to confiscate and kill their animals.

A court case in late March 2011 had appeared to finally settle the invasion dispute in favor of the Ju/’hoansi. At that time, the 32 Herero farmers were fined N$1,500 (US$224) each for their illegal invasion of the conservancy lands. That case, nearly two years ago, appeared to have settled the invasion related issues. Apparently the Herero persisted and have gotten back from the government significantly larger sums than they had to pay in those fines.