The authors of a recent scholarly paper suggest that the indigenous minorities of Malaysia—the Orang Asli—might have to sacrifice their lifestyles and cultures in order to achieve digital parity with the rest of the country. The basic reason is that the Malaysian government has articulated a goal of having a modern, completely computer literate, society by 2020. Aboriginal peoples like the Semai stand in the way of the nation achieving this seemingly worthwhile goal. 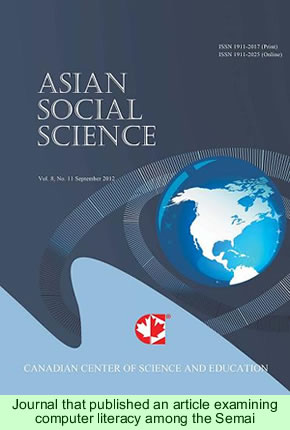 The study by Rugayah Hashim and his colleagues, published last year in the journal Asian Social Science, focused on the small Semai village of Kampung Bukit Terang, in the Kampar District of Perak State. The authors sampled 40 people in the village of between 104 and 130 people. The questionnaires were distributed by college student assistants who had to help some of the illiterate people respond. Out of the 40 questionnaires distributed, 39 were completed by 12 males and 27 females, who ranged in age from less than 16 to more than 36.

Computer literacy skills among the 39 Semai are on a par with their education levels. Out of the 39 people, 30 had no idea how to use emails. Similarly, 30 people were unable to use word processing software. Abilities to name computer parts were similar: 28 couldn’t name anything. Abilities to use a computer mouse, to surf the Web, and to use search engines were all similar: 26 to 28, two thirds or more, did not have those skills.

The results, not surprisingly, show that the Semai are excluded digitally from the rest of Malaysian society. The article points out that, in the nation as a whole, 98 percent of adults over 15 are literate, and 56 percent use the Internet. That is, there is an educational divide as well as a digital divide between the Semai and the rest of the country.

The authors state that the government has articulated a “People first, Performance now” policy, which, they argue, should be applied to the Semai. But the Semai are economically disadvantaged, they say, which affects their attainment of digital literacy. The Semai could achieve socio-economic inclusion, they argue, if they had enough training and time.

The concluding sentence of the article reveals the basic attitude of the researchers. “By continuously compounding the benefits of education, the mindset of the [Orang Asli] can be adapted to accept that times have moved on and that the flora and fauna can no longer sustain their livelihood.”

In other words, the Semai have to change, to abandon much of their forest-based culture and ways, in order to join the mainstream of modern Malaysia—for their own good. The authors do not examine the values of modernity in contemporary Malaysian life, much less those of the Semai village, and they do not show why the former are necessarily superior to the latter.

Their basic position is that economic advantages, and advanced education, should lead to higher levels of computer literacy, all of which are good and necessary in order to be a modern Malaysian. It is not at all clear why the Semai in Bukit Terang should adopt modernity if they don’t want to—it is just a given that everyone should want to be part of the modern nation.

More to the point, the authors do not examine Semai culture in any way to find out if it has any value, much less if it is worth modifying or abandoning. Worse, they don’t indicate if they have talked with the Semai themselves to find out what they want out of life, or what values in their traditional culture they feel are important to keep.

Hashim et al. seem to feel as if they have all the answers. The fundamental values of anyone’s life should be literacy, and especially computer literacy. Thus, the Semai of Bukit Terang are mostly failures, as their numbers so clearly reveal. Do they feel that Semai culture as a whole is also a failure? That’s not clear.

It is a shame that the authors could not suspend their preconceptions long enough to learn the virtues of Semai society. Had they interviewed the Semai themselves, they might have produced a valuable report showing the ways the people themselves want to modernize and change—and possibly fit computer literacy into their lives.