Raymond King, an Amish farmer in Lancaster County, Pennsylvania, is building on earlier measures he has used to save his soil by incorporating the latest management practices to protect his local watershed. He has been using a no-till technique of planting on his 75 acre farm since 1979, which has helped retard soil erosion. He also protects his land by planting in contour strips. 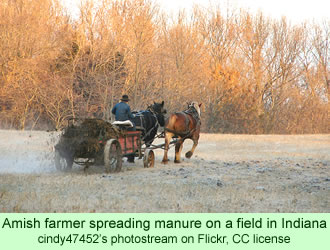 But according to an issue of the PA Environment Digest last week, he has gone far beyond those rather standard practices. With help from several agencies—the Chesapeake Bay Foundation, the Natural Resource Conservation Service (NRCS) in the U.S. Department of Agriculture, and the Lancaster County Conservation District—he has implemented additional environmentally sound practices other than the soil control measures he had long ago adopted.

He has constructed a barnyard wastewater collection system, a new manure storage facility, and a better way of collecting drainage fluids from his milk house. He planted shrubs and trees along the stream that runs through his farm. He erected fencings and a cattle crossing to protect the stream.

Wendy Coons, a technician in the NRCS, said that Mr. King built the manure storage facility so he could retain it for up to six months. That allows him to avoid spreading it on his fields in the winter, when it runs off quickly and causes more pollution.

King has developed a comprehensive manure and nutrient management plan for his farm. He is pleased with the results he sees by following the plan, which not only protects the environment, it saves him money. The plan shows him exactly where and when to apply manure, to give the plants the most benefit.

The streams in Lancaster County have been significant contributors of pollution to the Susquehanna River, which is a major tributary to the Chesapeake Bay, the largest estuary in the U.S. on the east coast of the Middle Atlantic states. The Chesapeake Bay Foundation (CBF), a group devoted to protecting the bay, takes a strong interest in the farming practices in Lancaster County.

Lamonte Garber, from the CBF, says that Mr. King has done more than fence his cattle out of the stream on his property. He has fenced a wider, forested buffer along the waterway. “He is even considering the option of permanently preserving the buffer to protect it for future generations. That commitment is to be commended,” says Mr. Garber.

Ashley Spotts, a specialist in buffers for the CBF, has worked closely with King in developing the forested strip along the stream. He says he is aware that one of Mr. King’s neighbors has been observing his efforts to protect the stream, and has been inspired to work for the same ends—better conservation practices—on his land. Wendy Coons adds that one of the most important aspects of the improvements on King’s farm is that he “wants to pass on what he has learned about conservation to other farmers.”

The Amish in Lancaster County have traditionally hesitated to work with representatives of public agencies, whom they view as outsiders who should be avoided, but this farmer obviously feels that the benefits to the natural environment are worth the extensive contacts he has made with people outside his own community.