In a recently published article, Thomas Gibson makes it clear that the Buid still retain the “radically pacifistic and egalitarian” society that he studied from 1979 through 1981. He revisited the Buid, also spelled Buhid in many publications, again in May 2009 for the first time in many years. 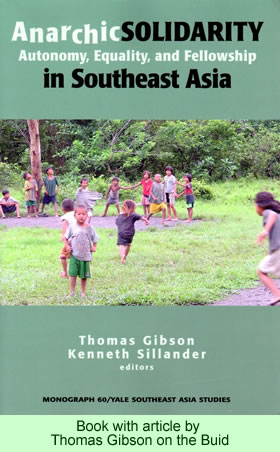 While a new description of Buid society is not the primary focus of his article, it does provide a good review of his earlier writings and some new insights. His essay primarily deals with the kinship systems and social rankings of societies across the islands of Southeast Asia.

Gibson argues that the pacifism and egalitarianism of the Buid resulted from their reactions, as persecuted highlanders, to the violence of their lowland neighbors. The Portuguese, Dutch, and Spanish colonizers in the Philippines engaged in numerous battles with the Muslim sultanates to the southwest in what is now Indonesia, and the Buid were on the edge of that fighting.

As a result of that history, the Buid reject asymmetrical social relationships and even the expectation that people within families will sustain close social ties. All relationships are based on versions of equality: adults with adults, adults with children, and humans with animals.

The author repeats information found in some of his earlier writings, but the essay is a good review for readers who may not be familiar with those works. For instance, he writes that the Buid do not believe that individuals can own land. The earth is freely owned by all, although perhaps the spirits have the first claim.

People only possess the items they create for themselves, such as the crops they plant in their gardens. Once trees they plant cease providing foods, they revert to the community. Husbands and wives each own the produce from crops they plant, pooling the harvests for their families but retaining individual ownership in the event of divorce. The people manage their gardens individually rather than as larger groups.

The Buid build their houses at some considerable distance from one another, near their swidden (shifting) garden plots, and usually hidden from outsiders in groves of trees. They tend to be spaced evenly, a kilometer or two apart across the landscape. They deliberately space themselves out, evidently as a way of avoiding one another and the conflicts that might arise.

Gibson found that the Buid cooperate for some agricultural tasks at certain times of the year, such as planting crops and harvesting them.  The sponsors of such cooperative tasks host other people from the spread out community at special mid-day meals for all the helpers. The socialization afforded by the meal is the reward for the helpers.

When the Buid kill animals—especially pigs or chickens—they share the meat equally, obsessively, and very carefully. These meat sharing events occurred in the community that Gibson lived in approximately weekly and they provided a primary form of social connectedness. No one was excluded or included due to age, sex, length of residence in the community, or genealogical connections to others.

The cooperation and sharing that households displayed served as models for the larger Buid community. However, breakdowns in households inevitably occurred, and marriages were quick to split up rather than allowing hostilities to increase. Quarreling would endanger others, so the community as a whole pressured couples who were fighting to resolve their problems or separate. The people frowned on pressures by one partner to preserve a marriage when the other spouse wanted to dissolve it.  It was better to divorce, they felt.

The community would  hold a meeting to help the couple separate, making sure that they agreed on a fair resolution of property and obligations. Normally, the causes of divorce were jealousy over an affair by one or the other spouse with another person, and usually the separated partners were soon married to new mates. It was rare for a person to remain single for more than a few months.

Gibson writes that the spirits of the earth would get quite upset over quarreling by a couple, and the quick resolution of the fighting, or the divorce, was necessary to placate those spirits. The divisions established a state of mystical weakness that had to be healed. Once the marital issues were settled, the people then sacrificed a pig to placate the spirits—and, of course, shared the meat evenly within the community.

The Buid also performed rituals through séances. Mediums sometimes combined their talents to fight off the attacks of predatory spirits. These frequent mystical experiences provided the Buid religion with a lot of vitality. A news story from the Philippines in December 2010 pointed out how the Buid are still able to transfer that vitality and power of their mediums into their fight for their lands against the incursions of lowlanders.

Gibson learned when he revisited the Buid in 2009 that they had gained a sense of integration as a tribe in the 24 years since he had previously been there. The Buid have formed nongovernmental organizations in both the Oriental Mindoro and Occidental Mindoro provinces to represent their rights. The government in 1998 issued a Certificate of Ancestral Land Claim granting them qualified exclusive rights over 98,000 hectares of land. The process of granting genuine land titles, called Certificates of Ancestral Domain Titles, is ongoing.

The Buid in the community where Gibson had done his field work, Ugun Liguma, seemed to exhibit a social style that was quite similar to what he had observed earlier. The continuity he observed suggested that they still retained their religious beliefs and their harmonious ways of settling marital and land disputes.

And of considerable importance, they still treat the old and the young, men and women, parents and children equally. They still place a high value on tranquility and harmony, and devalue aggression and competition. In other words, the Buid remain a highly peaceful society.