A brief incident of violence broke out among the normally peaceful Nubians at the end of last week, but the major injury was to the tourist trade image of southern Egypt. Since the incident affected over 600 tourists, it generated some news coverage. 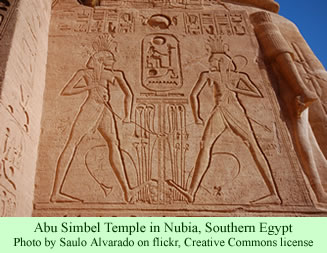 Details are a bit sketchy from the different accounts, but apparently a couple Nubian families living near the famed temple complex of Abu Simbel, about 150 miles southwest of the city of Aswan, disagreed about the distribution of agricultural lands by the government. According to Ahmed Hassan, an inspector of antiquities at Abu Simbel, some armed Nubians occupied the disputed lands with their tents. They claimed they had papers showing their ownership.

Members of a rival family, asserting their rights to the lands, set fire to the tents of the occupiers, who retaliated with gunfire in an attempt to scare off the challengers. Mr. Hassan’s take on the incident was that “no one was injured.” He added that the unarmed faction protested by blocking the road leading out of Abu Simbel late on Friday, April 26th.

Other sources indicate that one person was, in fact, injured in the confrontation, though whether due to a gunshot wound or some other cause was not clear. All sources agree that the unarmed Nubian family, protesting the incident, blocked the road as a way of demanding that the armed group be arrested for their violence in terrifying the peaceful Nubians—or so their narrative went.

The blockade of the road led to about 630 foreign tourists, and the 46 buses they had arrived in, being trapped in Abu Simbel. Security forces said that the tourists simply stayed in their hotels overnight while officials attempted to negotiate with the people at the blockade, at first unsuccessfully.

The governor of Aswan said that other hotels would also be opened to the tourists until the dispute was settled. By Saturday morning, the negotiations were successful. The protestors lifted the blockade allowing the tourist buses to leave.

The nature of the conflict and its resolution is of special interest. Robert Fernea’s 1973 book Nubians in Egypt: Peaceful People explains the ways these people used to handle family conflicts in Old Nubia—before the destruction of their traditional society by the closing of the Aswan Dam in the 1960s. Fernea wrote that the Nubians traditionally tried to avoid revealing serious problems to outsiders, particularly to people such as the Egyptian police, since the best way for a village to survive was to be ignored by authorities.

Fernea added that most of their disputes were, until the 1960s, resolved through popular mediation. The Nubians had a strong ethic of getting involved in public quarrels, and of trying to help the parties to a dispute find ways of backing off from a problem.

Disputes among family members were seen as especially troublesome, but the Nubians considered it a duty to try to mediate, to keep a dialogue going. For really serious disputes, they convened a council of a group that shared produce, called a nog. The senior member of the nog heard all the evidence to a quarrel and then required both parties to publicly beg the forgiveness of one another.

Unfortunately, the unique styles of conflict resolution of Old Nubia appear to have disappeared in the past 50 years. Since their traditional society was destroyed, it would be unreasonable to expect them to preserve the same patterns of retaining their peacefulness. It is not clear what, if any, dispute settlement strategies are now replacing them—except for protesting to gain public attention, which gets the authorities involved.