The man’s words are haunting: “We are Mbuti, children of the forest …. We were created in the forest, and the forest is where the spirits of our ancestors still live. The forest gives us all that we need.” Chief Mundeheykwa continues by describing the uses the Mbuti have traditionally made of forest resources—branches and leaves for their huts, tree bark for cloth, and dyes derived from plants and flowers for decorating. 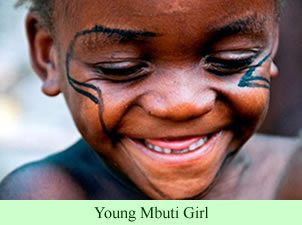 As he describes the benefits of forest life, a series of still images, one after the next every few seconds, provide color and context to this moving story about the famed Mbuti people. For instance, an image of a young girl’s face, carefully decorated with dye, flashes on the screen as the woman’s voice-over is narrating, in English translation, the chief’s words mentioning the uses of dyes for bodily decorations.

The chief continues by relating other uses of the forest: nuts, plants, fruits, honey, and meat. A legend appears on the screen telling us that the Mbuti pygmies have lived in the Ituri Forest of the D.R. Congo for thousands of years, and as of today 9,000 still live there, in the Okapi Wildlife Reserve.

The reserve was founded by scientists, including Terese and John Hart, to study and help preserve the okapi, elusive and endemic forest animals related to giraffes. The Harts and the Congolese scientists began the reserve at the facility established half a century earlier as Camp Putnam, which was where the famed anthropologist Colin Turnbull studied the Mbuti over 50 years ago. Unfortunately, in recent years the Okapi Wildlife Reserve has been at the crossroads of warfare and fighting.

This 5:44 minute video, just released to Vimeo last week, was clearly prepared as a way of celebrating with viewers the traditional skills and lives of the Mbuti, and, just as importantly, of raising awareness about the stresses and traumas those people are enduring.

An image of a somewhat grizzled man who is holding a small bow and arrow, named Chebalani, indicates he is the next speaker. He says that meat is their favorite food, and hunting is their most significant tradition. He describes the net hunting techniques familiar to all readers of Turnbull’s international best seller The Forest People (1961). Images of the ceremony that precedes the hunt, of the uses of the nets, and the shooting of antelopes accompany Chebalani’s description.

“Everyone is important in the hunt,” he tells us, with a fetching image of a Mbuti woman and a baby on her back on the screen. He describes how the hunters stretch their nets through the forest, and how the women and children make enough noise to drive animals into the nets for the men to kill. Then, he says, “we divide the meat into small pieces so that everyone in the group can have some.” Their forest tradition clearly includes fond memories of the custom of sharing.

Another man, identified as Chief Mangubo, takes over and tells us about the importance of the ancestors, and of music, to the Mbuti. The people play, dance, and sing every day as a way of communicating with their ancestors, he says. They welcome a new baby into the community through the performance of a special dance. They sing to insure the success of the honey collection season, they sing to celebrate marriages, to accompany their initiation rituals, and sometimes just to show their happiness. If problems come up, they hope their songs will elicit assistance from the ancestors.

The video then turns darker. We are told that, although they have lived in harmony with nature for millennia, their society, and the forest they live in, are both now under severe threats of destruction due to wars, poachers, and non-Mbuti immigrants.

Chief Mayani Mingi is introduced. He says that the Mbuti were ordered by the D.R. Congo government to leave the forest and to live next to the main road. There, they have suffered due to a lack of money—they can’t purchase needed goods. Food from animals is becoming scare because some Mbuti are killing them and selling the meat for the bushmeat trade. Other Mbuti are working for farmers but getting paid only a pittance.

The chief’s wife, Bangypa, is introduced. She tells us that the Mbuti worry their traditions will be lost due to living in the village. She says they encourage their children to not forget the forest-based culture of their ancestors. She adds that they teach the children how to eat traditional foods, and how to hunt. “We want to tell the world that we need help to protect our future. Without the forest we are not Mbuti. We cannot live,” she says as the video concludes.

The closing credits indicate that Molly Feltner is the director and producer of the video. A prominent photographer and filmmaker born in the U.S., Feltner is based in Rwanda.

Unfortunately, her video does not provide, at the close, any information about what viewers can do to help the Mbuti. Older news stories on this website chronicle some of the nasty events they have suffered in recent years, but the lack of any commitments to assist them from major international aid organizations is telling. We are not told if anyone really cares.

In fact, the closing credits indicate that armed guerillas attacked the Okapi Wildlife Reserve headquarters in June 2012 in retaliation for the efforts of the park guards to cut down on the poaching, which is decimating the wildlife. The fighters raped dozens of women, killed six people, and took over 50 hostages. They looted and burned the buildings. People that could, fled into the forest. The Mbuti featured in the video, people who lived near the park headquarters, have disappeared, and their whereabouts are still unknown.