The CBC reported last week that the design of a massive new research facility, to be located in the Nunavut community of Cambridge Bay, will be based on traditional Inuit culture and knowledge. 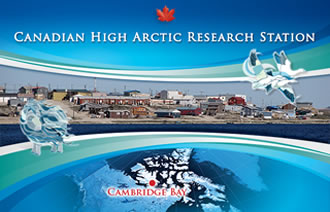 Alain Fournier, an architect from Montreal, told the community that designers of the very large Canadian High Arctic Research Station, CHARS, studied every aspect of Inuit philosophy and culture during the design process. “It’s more than just token, hanging cultural elements here, cultural elements there,” he said. “It’s really trying to delve as deeply as we can into the sources of culture. This is not an ivory tower. It’s a research station that intends to be welcoming and open.”

The detailed plans for the new building are shown on the facility page of the CHARS website. As the CBC summarizes it, visitors will be welcomed by an outdoor entrance structure that resembles a Qaggiq, a huge, communal igloo. Inside, a public space will welcome researchers as well as visitors to stop and have some tea.

The grounds in Cambridge Bay will include several buildings in addition to the main research facility, including a field house, a maintenance building, and a dorm for scientists. The environmentally-friendly buildings will have solar panels along the southern faces and will have composting toilets.

One of the Inuit traditions that the architects included is that the main entrances will be placed so that they will be scoured by the winds, to retard the accumulation of snow. “It’s common sense, but it’s common sense based on tradition,” Mr. Fournier said.

Cambridge Bay residents seemed to appreciate the acknowledgement of their traditions. Bernice Lyall commented, “having traditional knowledge incorporated in the facility is the most important thing. For youth, it will be an opportunity of identity, [to] know who they are.”

The main CHARS website states the mission of the new facility: “To be a world-class research station in Canada’s Arctic that is on the cutting edge of Arctic issues. The Station will anchor a strong research presence in Canada’s Arctic that serves Canada and the world. It will advance Canada’s knowledge of the Arctic in order to improve economic opportunities, environmental stewardship, and the quality of life of Northerners and all Canadians.” CHARS is expected to be under construction by 2014 and completed and open by 2017.

The website states that CHARS will be a year-round facility that fosters relevant science and technology relating to Arctic concerns. It will function as the center for a network of research stations dedicated to Arctic investigations. The original government mandate from 2007 stated clearly that part of the reason for the development is to strengthen “Canada’s sovereignty and place in the world.” The website points out that one of the priorities for the facility is the “efficient and effective monitoring and surveillance of Canada’s vast Arctic.”

But science is clearly at the core of the endeavor. CHARS will foster interdisciplinary investigations in the natural and physical sciences, economics, the social sciences, life sciences, health, engineering, technology, and the humanities. It will promote education and outreach as well as the actual scientific research.

The CHARS website describes more than just the overall mission and objectives of the facility. It also provides details of the innumerable meetings and processes that have gone into the careful development of the project. The release of plans for the buildings last week comes after six years of effort, and will lead, in four more, to their completion.

The website provides more details about the public meetings held June 10 – 12 in Cambridge Bay. It indicates that the design is still under development, and that the architects are hoping for further feedback from the community. The design, it indicates, is informed by the concept of Inuit Qaujimajatuqangit, the local term for traditional knowledge.