The Supreme Court of France recently struck down two laws passed in French Polynesia because some of the debates in the territorial assembly were held in the Tahitian language. In response, ­Édouard Fritch, the President of the Territorial Assembly, asked the President of France if he would support amending French laws to allow Tahitian to be accepted as a second language in the territory. It is, after all, the native tongue of the Tahitian people. 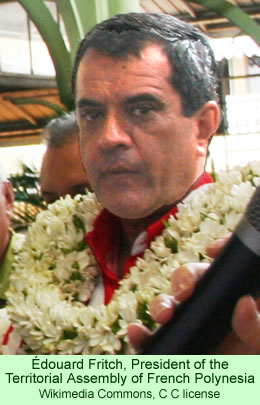 Mr. Fritch pointed out that the debates in the assembly are translated simultaneously, and that records of proceedings are maintained in the French language. He argued that changing the laws in France would guarantee that the people of the territory could use their Tahitian.

In striking down the local laws, the court in France did acknowledge that Tahitian was, in fact, recognized as a major local language in French Polynesia, and its use is an important way for the people to maintain their diversity and identity within the territory. It said that regional languages support the French heritage.

Students of peacefulness in Tahiti, who are interested in the arguments of Mr. Fritch, should consult Robert I. Levy’s masterpiece Tahitians: Mind and Experience in the Society Islands (1973). Levy makes the importance of the Tahitian language quite clear. Probably the foremost scholar to study rural areas of the Society Islands, the anthropologist devoted a lot of space in the book to his ethnopsychological analyses of the meanings of Tahitian language terms.

Some of them relate directly to the development of their peaceful ethos. For instance, he writes that their word here, love, has somewhat different connotations from the English word “love.” It emphasizes active beliefs and actions as the essence of a heterosexual relationship. The word suggests that the couple wants to do things together, with both their minds and their bodies.

When a man is caught in a situation where he has to eat a meal away from his partner, the implication of here is that he wants to take food back to her. On the contrary, a man who only has a physical desire for a woman, even if he lives with her, does not properly have a feeling of here for her, unless the totality of his thinking is focused on her. Here is clearly different from the desire for sex. The word also is used for parent-child, sibling, and friendship relationships, as it relates not so much to intentions as to actions and actual caring behavior.

Levy describes his lengthy discussions of this word with his Tahitian informants. Manu, for instance, explains that both he and his partner, Tetua, here each other, which makes their relationship so effective. If they didn’t share this kind of affection, their relationship would founder. “But the way it is, she heres and I here, and that’s that. When things are like that, life goes properly for a couple (p.318).”

The book describes numerous other Tahitian words and concepts, several of which also helped foster Tahitian peacefulness, at least during the early 1960s when he did his field work there. In sum, the preservation and use of the Tahitian language is clearly more than just a symbol of local pride or nationalism. It is also a vehicle for maintaining the ideals of nonviolence.