Allan Agaw, a 16 year old student, clearly cherishes the sharing tradition of his society—he hopes to give back to his Buid community in the Philippines after he completes his education. The spirit of giving and sharing, an outstanding characteristic of the Buid, was noted in the scholarly works of Thomas Gibson and, more recently, in news stories about Laki Iwan, the generous Buid elder who died in 2006 after donating land for the school where young Agaw is now studying. 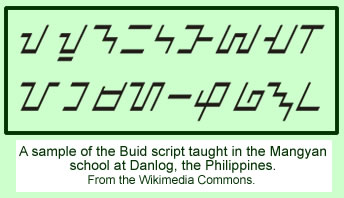 A news report from the Philippines last week indicates that the school that Laki Iwan founded in the mountains of Mindoro Island is trying to teach traditional Buid values while educating young people with skills for the modern world. This current report updates earlier ones about the Buid school published in 2006 and 2008.

The issues are similar in all three accounts. Buid children have difficulty fitting into schools composed of mostly mainstream Filipino students. Also, they have problems retaining their cultural values in the face of the dominant Filipino society. Yet many realize the importance of preserving traditional Buid social values—such as the sharing exemplified by Laki Iwan, and, apparently, Allan Agaw.

Mr. Iwan was a 90 year old farmer who died in 2006 after donating numerous plots of land to found schools. He insisted that Mangyan children should be educated and learn Western ways, but that they needed to retain the best of their own culture, such as, for the Buid, their unique written language. (Mangyan is the generic name for the seven different indigenous societies of Mindoro Island, including the Buid.)

The school he founded for Mangyan children in his village, Danlog, had 10 students enrolled in it when he died in 2006. In 2008 it had 48 students, and last week’s report indicates that it now has 60. A Facebook post from 2011 put the number of students at 108: 57 in elementary programs and 51 in high school.  It is likely that the news story last week was only giving the enrollment in the high school, though that wasn’t clear.

The reporter last week told stories that are similar to the ones of five and seven years ago, though it differs in some of the details. One difference: last week’s report says that the school, named Pamana Ka, and acronym, was established by the Franciscan Missionaries of Mary (FMM), while the two earlier accounts indicated that it was founded by the Mangyan people. Presumably, both were involved in getting it started. The most recent report indicates that the current director of the school, Aristea Bautista, is from the FMM.

The reporter found that everyone in the school emphasized the importance of Buid traditional culture. Bapa Ane Arevalo, an elder who teaches the ancient Buid script, said, “there are Mangyan[s] who, after studying in the lowlands, come back to the community but don’t speak our language anymore. It’s as if they’re ashamed of being a Mangyan.”

Before Pamana Ka was built 14 years ago, young Buid who wanted an education had to study in schools in the lowlands that are part of the majority Filipino culture. Clara Panagsagan, a science teacher, recalls being told, in such a school, that as a Mangyan she knew nothing.

Alma Aguilan, a mathematics teacher, noted that at a lowland school she was laughed at and humiliated because of her inability to correctly pronounce the word “present” the first time attendance was called. As time went on, even when she knew answers, she still hesitated about participating in classes for fear of having similar experiences. The need for Pamana Ka, a school by and for the indigenous kids, was evident.

Students remain on the Pamana Ka campus most of the year in dormitories, one for the boys, one for the girls, since their homes are so far from the school. The staff also live in the community because their home villages are scattered all over the mountains of Mindoro.

Margie Munoy Siquico, who formerly taught at Pamana Ka, told the journalist that the education of the students doesn’t stop for vacation breaks. She says that all the subjects taught in the school—reading, science, math, Filipino—are infused with Mangyan traditions and cultures because all the teachers themselves are from Mangyan communities.

The Buid elders in Danlog also play an important role in imparting their skills, practices, knowledge, and spiritual values to the students and teachers, especially through the stories they tell. Aristea Bautista, the school director, indicates that the school is committed to restoring “the faith … of the children in indigenous knowledge systems and practices…”

To further that goal, the school curriculum includes the subject “lupaing ninuno,” or “ancestral domain.” Taught at the end of the afternoon every day, the class focuses on teaching Mangyan cultural values, rituals, and agricultural practices.

Juanito Lumawig, Jr., who teaches science in the school, values the ancestral domain course. He told the reporter (in an English translation), “our dream, along with accepting the type of education that we advance, is for everyone to regard our ancestral domain as our sacred spring of knowledge and life.”

The Mangyan students at Pamana Ka raise vegetables and fruits in the fields around the school, and they take care of poultry and fish in a pond on the campus, all of which provide foods that they eat.

The school is getting some financial support from the Department of Education—Indigenous Peoples Education Office, assisted by the Australian Agency for International Development.