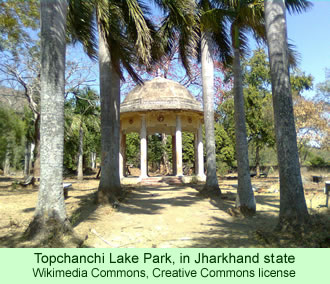 The Times of India sent a reporter to the Ramgarh District in Jharkhand state to visit the very poor village of Birhor Tola. The residents have to light fires every night to survive the evening chill, which can go down to 10 degrees Celsius (50 degrees Fahrenheit). They do not have enough warm clothing or blankets for the winter weather.

Kailu Birhor tells the reporter that, in order to survive, they “collect coal from nearby coal dumps of Central Coalfields Limited (CCL) and go to the forest in search of wood.” Mangar Birhor, from the same village, adds that blankets they were given a couple years ago have worn out and they are hoping for some help in the form of new blankets, so they can once again sleep in their huts.

The reporter adds that the Birhor traditionally have thrived on their hunting skills, but government authorized projects, which have decimated the forests, have had a severe impact on the people. Jhaman Mahto, a social worker, explained, “It is clear why [the] Birhors have been deprived for so long… because of government and corporate interests in massive mineral reserves in the forest.”

But government officials are defensive—they have always supported the Birhor, one said, and they will continue to do so. One official, whom the newspaper does not name, commented “we make huts for them and also provide food for them. The government is planning to come up with more schemes for protecting them.” He admitted that the government agencies only became concerned about the Birhor when international attention was focused on the people.

The reporter adds, tartly, that the government schemes were initiated a few years ago, but without any effective studies to determine what the Birhor needs really were. Many Birhor men have migrated to other areas for jobs, since the prices of rice and potatoes have soared and the people do not have enough to eat. Government welfare schemes have not filled their needs. Mangar added that the people were forced to beg for handouts, and to collect firewood and coal to generate a meager income.

Bheekhu, another Birhor from the same village, summarized their difficult situation: “We have always undergone a lot of problems. Life has always been tough and unfair to us,” he said.

A story in The Telegraph of Calcutta gives a more hopeful picture of conditions in Chalkari, a different Birhor village in the Bokaro District of Jharkhand, which is next to the Ramgarh District. The Telegraph article describes a picnic that Ashutosh Mairh, the principal of a school in Chalkari, organized on the last day of 2013. The school has a lot of Birhor children enrolled in it. Mr. Mairh and his outreach programs for the Birhor have been covered in 2008, 2009, and 2011 by major Indian news media.

Mairh, five other adults, and some young people helped organized a picnic for nearly 200 Birhor children in a park on the banks of Topchanchi Lake, a 214 acre reservoir and wildlife refuge that attracts thousands of visitors each year. The principal admitted he was affected when some Birhor youngsters told him they had been searching for food from the trash left by picnickers along the lakeshore. “They urged us to organize a picnic for them and we did,” Mairh said.

The principal added that the adults did not draw on public funds for the picnic. Instead, they raised money for the costs from teachers, parents, and students, and drove to the lakeshore in their own vehicles. He explained that the purpose of the picnic was to provide a park-like venue for the Birhor children to mix with the non-Birhor kids who were also there.

Mr. Mairh wanted the two groups of youngsters to learn about each other’s cultures and traditions. The children played tug of war, pitto, kit kit, and kabaddi. Pradip Birhor, the 14 year old son of Bara Sukar, the headman of Chalkari, told the reporter, “for the first time, we participated in a picnic and enjoyed everything to the hilt.”

The Telegraph report describes Mr. Mairh as one of the founders of Samvedna, an organization formed to address Birhor issues. It does not indicate if the group is proposing any solutions to the underlying causes of Birhor poverty.