The role of rice in the diet, culture, economy, and politics of Thailand received renewed attention in recent weeks as the country prepared for its national elections. The current political dispute in Thailand, though mostly peaceful, has garnered international news for several months focusing on the rural/urban divide in the nation. 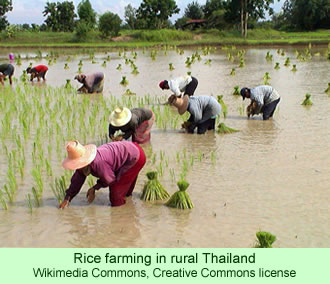 The Khaleej Times, a daily newspaper from the UAE, published an article on January 17th about the history of rice in Southeast Asia. Rahul Goswami, a Unesco expert on cultural heritage, described the antiquity of rice cultivation in much of Southeast Asia. He pointed out that rice terraces in Bali and in the Philippines are considered by Unesco to be international cultural treasures, and there are records of rice cultivation going back 4,000 years and more.

But of most interest are his comments about rice culture among the Rural Thai. The author indicates that the rural people in Khon Kaen province, north of Bangkok in central Thailand, consider their region to be the birthplace of rice cultivation. Local people will tell visitors that rice was first cultivated there 5,500 years ago.

Goswami writes that the language, rituals, traditions and festivals of that province all celebrate rice. In Khon Kaen, conversations, legends, and lore focus on rice cultivation. It is what the writer refers to as “the essence of resilience.” He adds that farmers still place bamboo traps, whose designs have not changed for thousands of years, in the sluices of irrigation channels. They still yield fish when irrigation gates are opened and water pours into the rice fields.

An article published last Thursday in the U.S. cable television news channel CNBC.com updated the story by examining the role of rice in Thailand’s current political uproar. The issue is a rice subsidy program, which the author claims has been part of the reason for the government’s massive appeal in Rural Thailand. At the same time, perhaps predictably, it has been attacked by anti-government people as corrupt and economically unjustified.

The author of the article, Leslie Shaffer, describes the rice subsidies as “an expensive boondoggle.” She writes that it is an important factor in the current political strife. But she predicts that ending the subsidy will be a difficult option. However, not once in her economic analysis does she compare the controversial rice subsidies in Thailand with agricultural support and subsidy programs in other countries such as the United States.

The thrust of the criticism is that rice exports have declined during the duration of the current subsidies. She quotes Vichai Sriprasert, the CEO of a big rice exporter, Riceland International, as saying that the quantity of rice exports has declined by 35 percent and revenues by 25 percent during just the first year of the program. “We used to be the rice champion of the world,” he told the writer, but Thailand is no longer the world’s leading rice exporter.

The argument continues that the subsidy program was intended to pay farmers for their rice at higher than market values, to stimulate rural incomes and consumption, but a lack of funds has delayed payments to them. Farmers who are normally strong supporters of the current government are going into debt. The anti-government factions in Bangkok are demanding an end to what they consider to be corrupt populism and vote buying.

Vichai, who admits that he would like to see the current government out of power, believes that the subsidies distort the market, especially since the program is badly managed. He says that a third of the $24 billion in funding has been lost through corruption and stealing, and only one third of that amount has actually found its way to farmers. “It’s a huge problem,” he said.

Ms. Shaffer, however, does write that the populist program may have helped minimize rural poverty, which peaked at 42.6 percent of the population in 2000. Poverty declined by 2011 to about 13.2 percent, according to figures from the World Bank. Many of those poor people live in rural sections of the country.

Financial analysts consulted by CNBC did not agree on the impacts of ending the subsidies, whether or not the current government survives the challenges of the moment. According to one analyst, Nirgunan Tiruchelvam, Rural Thai farmers have not really increased their rice consumption, despite the claims of subsidy supporters. He added that eliminating government stockpiles of rice will not lead to increases in its price.

Although a government opponent, Vichai admitted that “obviously, the farmer should be helped. Subsidies should go directly to supplement their income. We call it income support rather than price support. That would not distort the market.”

A Wikipedia article, “Rice Production in Thailand,” like the article in Khaleej Times, describes the strong ties between rural culture and rice farming. For instance, it mentions a Cat Procession in central Thailand, where villagers carry around a cat and throw water at it, in the folk belief that having the animal cry will bring fertility to the rice crop.

The Wikipedia also describes how farming in Thailand over the past 50 years has been transformed, mostly due to government policies and World Bank funding of infrastructure projects such as dams, canals, ditches and locks. With the availability of improved strains of rice, the introduction of fertilizers, and new farming equipment, the owners of larger farms became more and more successful. They were able to buy out the smaller farms, driving many farmers out of business.

In essence, peasant farmers who used to own their own farms and were income and food self sufficient were forced to sell their land. They became tenant workers on the farms owned by others. These changes have been managed by urban people and elites who wanted Thai rice to compete in world markets. The overall economy of Thailand grew, while many rural Thai peasants became impoverished victims.