Some Hutterite children in South Dakota are attending a public school, at least for the time being, because the one at their colony burned down. The story provides some insights into the approaches taken by the Hutterites to educating their children. 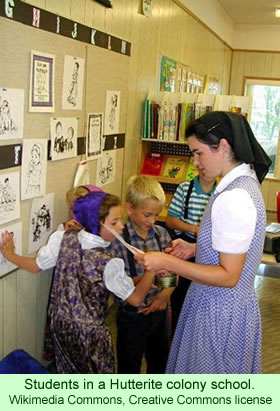 According to a news report from Brookings, SD, the school at the Red Willow Colony, 3 miles south and 4.5 miles west of the small town of Toronto, burned to the ground on Monday, January 6. By the end of the week, colony elders had made arrangements to bus the seven school-age children in the colony to the Deubrook Elementary School in Toronto.

Colony elders and parents of the children have expressed the wish that contacts between the local Toronto children and the Hutterite kids be minimized. In response, Kevin Keenaghan, superintendent of the school district, said that “we’re trying to abide by their parents’ wishes and watching out for how much contact they have with the other children.” He arranged for the Hutterite children and their teacher to use their own classroom at the Toronto school, to minimize contacts with the local kids.

The small school building on the colony grounds was next to a mobile home, which caught fire due to a malfunctioning heater/air conditioner unit. Both structures burned down. Elders at the colony considered sending the children to a larger school at another Hutterite colony farther to the south, but they decided that the longer commute was not in their best interests.

Instead, the non-Hutterite teacher, Cindy Olson, commutes to the colony every morning from her home in Brookings. By 8:45 am, when the colony German teacher is finished with his lessons in the German language and Hutterite beliefs, she takes the wheel of a colony van and drives the children the short distance to the Toronto school.

Superintendent Keenaghan said that the colony owned the building but the school district provided, and of course lost, the supplies inside it. Those supplies included a laptop for the teacher, two other laptops, six workstations, reference books, student’s books, and teaching materials. The colony bans televisions, but it allows the use of instructional materials on computers—though the machines have very limited access to the Internet.

He indicated that the seven school children come from only two families at the colony, and they range from kindergarten through 8th grade—a “typical one-room country school,” he said. The kids from Red Willow are bringing their own lunches to the Toronto school. In the middle of the afternoon, Ms. Olson drives the children back to the colony and leaves them there, along with the van.

Mr. Keenaghan told the journalist that colony elders had informed him they would be rebuilding the school on the colony grounds very soon, but they haven’t told him exactly when.

Hostetler (1974) gives additional background to the information about Hutterite educational practices provided by the news report. He writes that the public schools located at the colonies are taught by outsiders, with the curriculum including reading and writing in English. This provides a deliberate contrast to the German instruction by a colony elder that starts every school day.

The children thus learn to associate their own customs and beliefs with the German language and the ways of the outside world with the English language. The Hutterites recognize the importance of their children mastering both languages and being fully aware of the culture of the non-Hutterites that surround their colonies.