National Geographic covered a lot of familiar ground in its recent news report on the Nubians of Egypt, but it also included some interesting information about Nubian culture and current affairs. 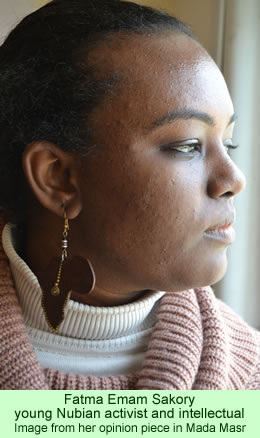 The journalist writing for the Geographic, Peter Schwartzstein, begins his story by recounting his meeting with Fatma Emam Sakory. She arrived late. When she finally got there, she recounted the racial taunts and abuses she had just suffered as she hurried through downtown Cairo to the appointment.

A prominent Nubian activist and researcher who was featured in the news last month, Ms. Sakory was justifiably angry. “You’re black—who’d even want to look at you?” one man taunted after she reacted negatively to his advances.

She tells the journalist about the importance of music to the Nubians. School children join the elderly in singing songs of sorrow for the land along the Nile from which they have been exiled. “We sing of the trees, we sing of the river,” Ms. Sakory tells him. Despite the fact that she has no personal memory of Old Nubia, she remains a fervent advocate of the Nubian right to return—to lands near the Nile from which their parents and grandparents were exiled in the 1960s.

One hopeful note in the article is the fact that the new constitution of Egypt, passed overwhelmingly by a referendum a few weeks ago, contains an article that pledges “to bring back the residents of Nubia to their original areas and develop them within ten years.” It’s just one point in a large and complex document, but it gives the Nubians hope for eventual changes for the better. Of course, it will be up to elected—or appointed—governments over the coming years to implement that constitutional provision.

The Geographic piece includes some interesting facts about the Nubians. It indicates that Nubian activists estimate their population at around 300,000 people in Egypt. It reports that the Egyptian military used Nubians who could speak their language fluently as code talkers during the 1973 war against Israel—kind of like the famed Native-American Code Talkers, such as the Navajos, who communicated in their languages for the U.S. military during World War II.

Mr. Schwartzstein does more than provide facts. He emphasizes Nubian distinctiveness. He writes that “their language skills and famous amiability have enabled them to play an outsized role in Egypt’s tourist sector.”

He describes the enthusiasm for Nubian culture that others share with Ms. Sakory. Yahia Mohammed, who is a Nubian English to Arabic translator, says, “aside from the emotions and the feelings of yearning that my generation have developed for Nubia, I believe there is so much potential.”

Another, Mustafa El Shorbgy, a civil servant, rhapsodizes about the role that Nubia can play in relations with the peoples to the south. “Nubia will be like a door for all of Africa,” he argues.

As one might expect from National Geographic, the story on the NGS website includes a number of effective images of the Nubian people.