In 1977, a tree fell during an evening thunderstorm on a Chewong camp in a central Malay Peninsula forest, killing and injuring several people. Anthropologist Signe Howell arrived shortly after the tragedy had occurred, but the Chewong dismissed her thought that it was bad luck for them—they had no conceptions of good or bad fortune. 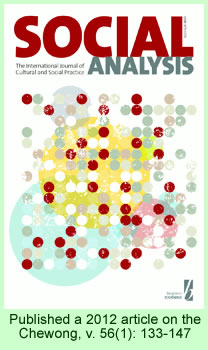 Instead, they felt that the tree had fallen on them that night, killing three people and severely injuring two others, because of moral errors that some had made earlier that same evening. Several people had laughed at some millipedes that had happened into their lean-to.

Laughing at living things is strongly prohibited in their society, a sanction that they call talaiden. They had broken rules in their belief system, proscriptions that are part of what Howell refers to in a recent journal article on Chewong conceptions of causation as their “semantic and moral universe (p.134).” The camp had been severely punished for their infraction.

The author provides a careful explanation of how Chewong beliefs explain their highly peaceful society—and, of course, the events of that tragic stormy night. It seems as if Tanko, the thunder spirit who lives in the sky above, and Original Snake, who lives in the sea below the earth, decided to inflict their punishment—the heavy rain storm—on the rule-breakers.

The Chewong were convinced that their own actions had brought about the tragedy. The fact that some of the people who had been inured were not, themselves, involved in teasing the animals was not relevant. Talaiden rules have wide applicability: laughing at animals may endanger a whole community.

In order to explain better the Chewong way of thinking, Howell describes the values and principles that form their social world, which they see as co-existent with the cosmos. For they live in an environment in which most sentient beings, including humans and spirits, exist in the same moral universe.

They all follow the same cosmic rules, which maintain proper order and social behavior. Correct knowledge of those rules of proper conduct is imperative so that all can live harmoniously together in the forest. All men and women are thought to have full knowledge of the basic rules.

This principle forms the organizational basis of Chewong society. All people—which also includes non-human beings that are characterized as “people”—are thought to be equal, with identical qualities and attributes. “People” are defined as beings that possess consciousness and rationality—ruwai in their language. They see the universe as a unity, but it is a unity that is filled with different species of sentient beings, each of which has its particular identity.

The Chewong gain their understandings of the nature of reality from their many myths, which they all know quite well. Their myths allow them to understand the world in which they live; they confirm the causes and effects of activities in their lives. Myths explain for humans and other sentient beings the principles under which the world operates. Furthermore, they provide practical demonstrations of the rules of proper behavior.

The Chewong do not make value judgments on individual achievements or lack thereof. Actions or personal qualities that are highly desirable, or those that are undesirable, are not judged. In fact, the abilities or achievements of individuals are ignored. While individual attributes may be recognized, people do not make much of them. Success or lack of success are dismissed as irrelevant. If Howell commented on someone being a good hunter, the person she was talking to would inevitably respond, “all men are good hunters.”

Not surprisingly, there is no sense of social status or hierarchy in Chewong society. “Theirs is a society in which peaceful co-existence is not only valued but lived and competition is not a meaningful behavioral category,” she writes (p.139). The spirits, who are offended by acts that break rules, are the ones who punish the offenders. Humans, however, may not institute punishments for human antisocial acts.

Another important rule that guides Chewong behavior is the punén rule. Punén requires anyone bringing food into a settlement or camp to share it with everyone present. If someone else learns that there is food in the camp that has not been properly shared, he or she might experience an extreme, and dangerous, feeling of unfulfilled desire. The danger is that the envious person could fall seriously ill due to that desire—and that illness would be the fault of the stingy individual.

A séance would then be conducted by an experienced shaman which might help retrieve the soul (ruwai) of the ill person, the one who has been so distressed by the lack of sharing. But if the shaman is unsuccessful and the sick person dies, the stingy person will be responsible for the death. Thus, the Chewong place extraordinary sanctions on anyone who contradicts the fundamental social need to share forest foods.

Howell sums up these points by writing that the Chewong have many other intricate rules governing their behavior in addition to talaiden and punén, which she describes in detail. She explains other dos and don’ts, taboos that proscribe all sorts of activities, rules that must be followed: the way knots are tied in a carrying basket, the manner in which beams are fastened together in the rafters of a house; the way people are forbidden from whistling in the forest; the fact that the afterbirth of a newborn baby must be wrapped in a certain leaf and placed in the top of a particular tree.

Their rules may seem to be heavy, but they have no institutionalized ways of maintaining the social order—no police force to keep the peace, no concrete way to restrain bad behaviors. Their rules accomplish that for them, and yet they provide maximum freedom for them within the context of their life in the forest. Their rules, their practices, constitute their cosmological knowledge, and help maintain their highly peaceful society.