Jumanda Gakelebone, a prominent G/wi advocate of the rights of the persecuted San minority in Botswana, has described the injustices his people have suffered to Britain’s Prince Charles. His arguments, advocating fair treatment for the former hunting and gathering people of the Kalahari Desert, were covered by a feature story in the Guardian on April 18, which was then reprinted by The Namibian on Wednesday last week. 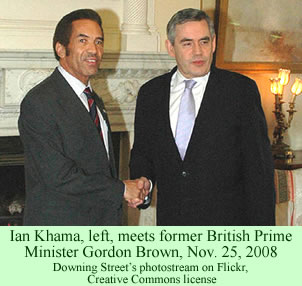 John Vidal, author of the report and environmental editor for the Guardian, describes the way the government of Botswana has systematically been working to clear the desert lands of the indigenous minority people in order to gain revenues from luxury safari camps, diamond mining, and fracking.

Wealthy tourists evidently pay £500 per night for such amenities as watching the local G/wi people shoot arrows in the desert sands, participating in game drives, and sipping drinks in camp. One tour company offers the opportunity to walk with some of their staff members who are from the local San communities.

Perhaps the most damaging action by the government of Botswana has been the recent prohibition of hunting, which has been one of the mainstays of San desert societies for thousands of years. This ban was announced in January by Tshekedi Khama, the minister of wildlife, environment and tourism and brother of the President of the country, Ian Khama. It represents a final blow to San society and culture.

Gakelebone, spelled by the Guardian “Kakelebone,” told the reporter, “We have survived for millennia in one of the world’s driest areas but they treat us as stupid. We are hunter-gatherers yet we get arrested. We cannot damage the wildlife. If we kill one animal we eat it for a month. We are not allowed to hunt but others can.”

In a letter to Prince Charles, Gakelebone referred to the prince’s meeting in 1987 with Sir Laurens van der Post. The South African writer and conservationist had invited him to come and meet the San people. Van der Post, who is now deceased, was the godfather of Prince William, the oldest son of Charles.

According to Mr. Vidal, Prince Charles said, after visiting van der Post and the San, that his understanding of the environment had been particularly influenced by his visit with them. Charles wrote, “What I discovered was the profound and intuitive ties that bind the bushmen to their land; their awareness of the workings of the natural world and of the delicate balance between life, physical surroundings and inner spirituality that they had maintained for so long in the harshest of environments … The bushman is an innocent victim of what, far too glibly, too many of us would call ‘progress’… We all lose if the bushman disappears.”

Earlier this year, Botswana’s President Khama attended a conference at Clarence House in London, hosted by Prince Charles, which attempted to promote among national leaders the value of protecting large animals that are threatened with extinction, especially elephants and rhinos. Khama’s government has apparently used this initiative as cover for its repressive policies against the San people, particularly the cancellation of their right to hunt.

Gakelebone maintains that part of the reason that Khama is especially committed to ending the traditional existence of the San is that his family owns extensive tracts of Kalahari Desert, and a nephew has shares in a tourist game lodge. “His family is making money out of this,” he charges.

He continues that the San will doubtless continue hunting as best they can, but he fears that they will be caught and arrested, imprisoned, and driven out of their homelands. “The government is not telling people about this. We think they want a pretext to arrest us [and] drive us out,” he told the reporter.

He added that the San people have been forced into resettlements, where they must live on government handouts. He feels that government agents treat them as if they are stupid when they give them food and clothing. They tell the San that they are only Bushmen, that they are primitive, and that the elephants are more important than they are. Vidal quotes Gakelebone’s complaints extensively.

He resents just about everything the government does. They give the San people sugar, sorghum, and beans, but they never give them meat. He argues that they want to change the people from hunters into pastoralists. The agents gave them a few cows and a plough when they moved them out of their former territory, and they encouraged them to forget their ancient culture and to modernize.

“This is systematic persecution. My grandfather used to tell me that he had nothing to give but the land. ‘That is your heritage,’ he said. If you take it you are killing us. If you deny us the right to hunt, you are killing us,” Gakelebone argued.

He continued by maintaining that the death rate among the San is increasing, though it was relatively low when they were still allowed to live nomadically in the Kalahari. Elderly people then died of old age; now people die of TB and HIV.

A spokesperson for Prince Charles refused to comment to the Guardian.